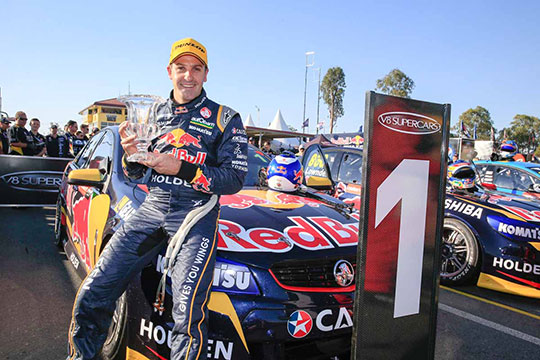 Jamie Whincup has closed the gap to Mark Winterbottom in the championship after leading home a Red Bull Racing one two in Saturday’s opening race of the Coates Hire Ipswich 400.

Lowndes looked like a strong contender for the win after leading comfortably from pole position, but just after half-distance, Lowndes ran wide exiting turn 6 starting a frantic battle with Whincup. The pair then exchanged the race lead three times within a lap with Whincup emerging ahead in the Red Bull battle.

Valvoline Racing GRM’s Scott McLaughlin was unable to make any ground on the Red Bull Commodores after starting and finishing in third.

Holden Racing Team’s James Courtney was unable to capitalise on his starting position and like McLaughlin and Coulthard finished where he started in a respectable fifth place. It wasn’t made easy for the Holden driver however as he held off a late charge from Mark Winterbottom and Will Davison who were forced to settle for sixth and seventh respectively.

Eighth placed Garth Tander was the field’s biggest mover after starting the race all the way back in 15th. The HRT Driver showed his car had good speed as he cut through the field with little opposition.

The top ten was rounded out by FPR’s David Reynolds and the Tekno Autosports Commodore of Shane Van Gisbergen.

Notable movers from back in the pack include Erebus Motorsport’s Lee Holdsworth who was able to make up six places into seventeenth.

Russell Ingall also managed to make up four positions in his Repair Management Racing Australia Commodore after a poor qualifying saw him start way down in 24th.

It was a relatively incident free race with exception of some minor mishaps for Nissan Motorsport. A major lock up saw Todd Kelly flat spot three of this tyres effectively putting an end to his race as he was forced from 11th to the back of the pack. Things went from bad to worse for Kelly when a puncture sent him for a trip though the turn one gravel. Pitting to replace the flat tyre, he finished 24th.

Kelly’s Nissan team-mate James Moffat was the only race retiree after puncturing the left rear tyre of his Nissan Altima in the closing stages.

The race weekend continues with another 100km race today followed by a 200km race tomorrow.