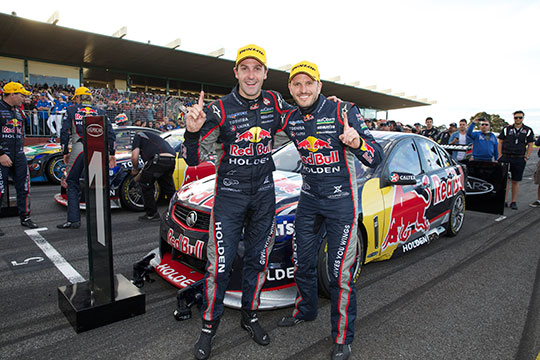 Undeterred by a drive-through penalty, Whincup fought back from running as low as 25th to take his ninth win of the season and extend his Championship lead to 96 points, over second-placed Lowndes.

Pitting from the lead under the safety car on lap 66, there was initial confusion as co-driver Dumbrell was mistakenly told to stay in the car on approach, before the order came to jump out. As Dumbrell unbuckled himself he kicked the car into gear, spinning the rear wheels while on the jacks, and earning a subsequent pit lane drive through penalty.

With the help of some exceptional strategy by the Red Bull Racing Australia crew, Whincup charged his way back into contention, taking the lead from teammate Craig Lowndes with 10 laps to go and pulling out an eight second gap at the chequered flag.

The race wasn’t without its dramas for Lowndes and co-driver Warren Luff either, with Luff forced to double-stack in the pits in an early safety car pitstop on lap 18 (after an apex cone was dislodged at Turn 6), before a trip through the gravel as Team BOC’s Andrew Thompson dived down the inside at Turn 1 dropped Luff to 10th. Staying out under the next Safety Car deployment, Luff worked his way back through the field before handing over to Lowndes, who guided the car home to second to complete the one-two ahead of Will Davison and co-driver Steve Owen in third. The incident between Luff and Thompson was investigated after the race but not deemed to have breached the rules.

Despite plummeting from third to 22nd after being double-stacked in the first round of pit-stops and then suffering a gearbox oil leak in the closing stages, the #6 Pepsi Max Crew pairing of Davison and Owen fought back to round out the podium, holding off Erebus Motorsport’s Lee Holdsworth and Craig Baird in fourth, the new comers best result so far this season.

James Courtney and Greg Murphy rescued fifth despite two mechanical black flags for loose bodywork incurring two extra pitstops. The Holden Racing Team duo held off the second Pepsi Max Crew Ford entry of Mark Winterbottom and Steve Richards, who also recovered well after Richards stalled the #5 Falcon on the grid to go on to lead the penultimate stint before a problem with the front left tyre in the final pitstop cost the FPR pair any chance of a podium.

A huge crash involving Ash Walsh in the #17 Wilson Security Racing DJR Falcon brought out the second Safety Car on lap 34 . Flying down the back straight at more than 200km/h, Walsh made a move on Baird but locked up a rear tyre slamming into the barrier at turn nine. Walsh was unhurt, but the same couldn’t be said of the car, retiring on the spot.

Wilson Security Racing pairing Chaz Mostert and Dale Wood lost out on a certain top-ten finish after copping a penalty for entering the pit lane too quickly prior to the #12 car’s third stop. Left battling in midfield, Mostert was then fired off the circuit by Tekno Autosports’ Jonathon Webb at the last corner in the battle for 12th, before recovering to finish 14th. Webb was penalised a loss of 25 Championship points following a post-race investigation.

Garth Tander and Nick Percat suffered a disastrous day, Percat shown a mechanical blag flag for loose bodywork on lap nine, before receiving a penalty for speeding in the pit-lane. Brake, battery and steering issues then befell the Holden Racing Team pair, Tander eventually crossing the line in 22nd.

Jason Bright’s Championship hopes were dealt a blow after a loose bolt on the steering mount put the Team BOC Commodore in the wall on lap 113. The crew replaced the mount and Bright re-joined to finish 24th, 13 laps down.

Scott Pye and Paul Morris were the only other pairing to not finish after Pye was forced to retire with power steering failure with just twenty laps remaining.

The Championship next converges on the fearsome Mount Panorama circuit for the Supercheap Auto Bathurst 1000 with Whincup and Dumbrell leading the standings for the PIRTEK Enduro Cup.