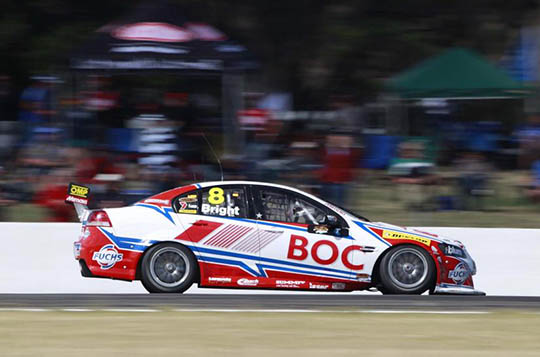 Qualifying first behind TeamVodafone and FPR on both days at Winton this weekend was a highlight for Team BOCs Jason Bright, who finished sixth today.

The two teams have dominated the V8 Supercar Championship this season, with Jamie Whincup wrapping up the title battle today, and Bright says it was satisfying to be the team closest to the mark.

During todays race an early safety car, caused when James Moffat pulled off track, compromised Brights race strategy and he found himself with a lot of cars to pass after pitting out of sequence. He made the most of his fresher rubber, however, moving from 23rd to sixth by the chequered flag.

The final round of the 2012 V8 Supercars Championship will be from November 30 December 2.

Jason Bright
Team BOC
“It was satisfying to get another good qualifying result. We know the cars in front are the ones to beat this year so to start sixth is still very satisfying and put us in good shape for the race.

“It was a shame that a safety car was thrown for no reason in the end [Moffat managed to get his car back to he pits] because it restricted what you could do with strategy in what would have been a very good strategy race again like last year. When the safety car came out it made it a no-brainer to come in and pit on that lap instead of running a more risky strategy. It basically reset the field on fresh tyres.”