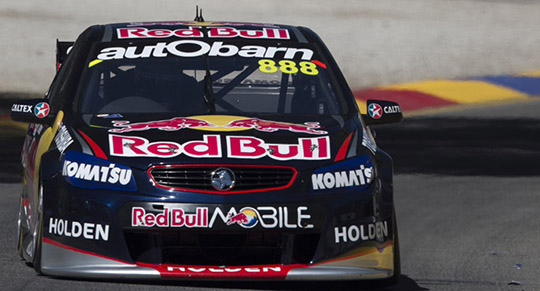 Craig Lowndes got the first event of the new V8 Supercars era underway with a dominant win in the opening race of the 2013 Clipsal 500.

The Red Bull Racing Australia driver started the 250 km race from third, but broke clear of the pack after a short first pitstop, pulling out a gap of over 20 seconds by the finish.

Lowndes’ victory, his first win in Adelaide since 2006, takes him to 90 career wins, drawing him level with Mark Skaife on the all-time V8 Supercars/ATCC race winners list.

“It was sensational,” Lowndes said.

“The car was great straight out of the box, we showed the pace in qualifying and you know, we didn’t know how the tyres or set-up would go throughout the race but it couldn’t have worked out better.

“The car was great and to get the first win of the year and the first win with Red Bull Racing Australia, I couldn’t ask for more.”

Pepsi Max Crew FPR’s Will Davison came through from seventh to take second, ahead of defending champion Jamie Whincup in third.

Pole-sitter Shane van Gisbergen fell back to ninth after bogging down at the start handing the lead to Mark Winterbottom, but it was a day to forget for both, after Winterbottom’s race ended on the opening lap with a broken gearbox. and Van Gisbergen suffering the same fate 16 laps from home, after fighting back to third.

With Winterbottom out, Lockwood Racing’s Fabian Coulthard took the lead, before Lowndes gained control. Coulthard appeared to be in contention for a podium until brake issues dropped him off the pace and down the order into 19th.

Rick Kelly brought the first of the new manufacturers home in 11th in his Nissan Altima, just two seconds outside of the Top-10, while Nissan team-mate James Moffat finished 14th.  Tim Slade was the best of the Erebus Motorsport E63 AMGs in 15th, with Lee Holdsworth finishing in 17th despite problems with a hot brake pedal. Maro Engel failed to complete the formation lap suffering fly-by throttle problems, but he rejoined several laps down, finishing 24th.

In only the third time in the event’s history, the race ran green for the entire 78 lap duration.