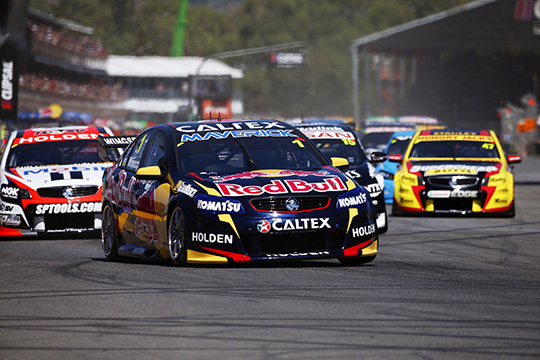 Jamie Whincup has dropped from fourth to seventh in the V8 Supercars Championship standings after being handed a 25 point penalty for careless driving.

Whincup made contact with Michael Caruso’s Nissan when he lost the rear at Turn 9 while fighting for 6th on lap 63.

Both cars pitted for repairs with Caruso finishing 14th and Whincup 15th.

The penalty drops Whincup behind Ford rival Mark Winterbottom in the standings and increases the gap to team-mate and points leader Craig Lowndes out to 108 points.

It was a day to forget for Whincup after he also copped a controversial pit-lane penalty when his car controller was earlier deemed to have illegally assisted the crew to repair minor damage to the right front. The penalty almost certainly cost Whincup victory after his comfortable lead with just 20 laps to go was erased.

Following an investigation and admission of careless driving, Courtney was deducted 25 points for causing collision with Lee Holdsworth and Scott Pye in Race Two.

Percat’s penalty deduction came after he collided with Caruso in Race One.

Caruso also received a fully suspended 25 point penalty for causing contact with Dale Wood after a careless circuit re-entry at Turn 9 in the first race.

An incident involving contact between Russell Ingall and Wood at Turn 5 during Race Three is continuing and will be determined at a later date.