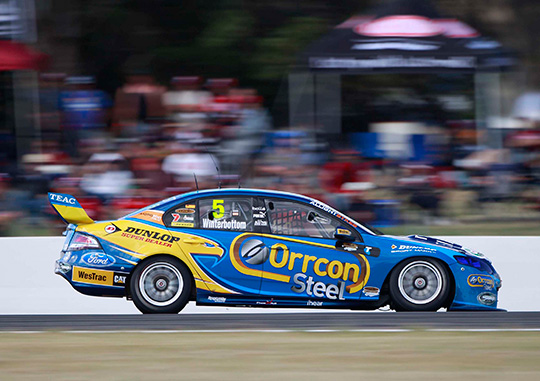 Ford Performance Racing’s Mark Winterbottom has finished second at the team’s home event at Winton in a race which saw the 2012 title decided but not before a gallant fight from Ford’s championship hope.

Winterbottom started third and held the position early before a penalty for Jamie Whincup and team work with Will Davison shot him into the lead. He then led through until lap 41 when he made his final stop. He emerged ahead of a charging Craig Lowndes but could not resist and slotted into second where he finished the race. Despite his efforts Whincup’s recovery drive to third was enough to claim an unassailable lead heading into the season-ending Sydney Telstra 500.

David Reynolds had a far stronger race in finishing eighth despite being pushed off track by Tim Slade 11 laps from home. He was in a three car Ford battle for the podium until his tyres dropped off in the closing stages.

Davison started second on softs and led by the end of lap one before building a lead of more than 11 seconds before the safety car was deployed for a briefly stricken car that had already cleared itself. With his lead eroded his alternate strategy which would see him finish the race on hard tyres was compromised. He emerged from his final stop without the buffer he had expected and with the rest of the field on softs he could only hang on to claim 11th place.

In qualifying Davison and Winterbottom battled for pole. The pair eventually settled for second and third respectively where the top three cars were covered by a mere 0.05s. Reynolds showed much improved pace to start seventh, only a few tenths further back.

DRIVERS’ VIEW
Mark Winterbottom – #5 Orrcon Steel FPR Ford
Qualifying: 3rd – 1m22.84s
Race Result: 2nd – Fastest lap: 1m24.72s
“We gave it all today and did as much as we could but in the end it wasn’t quite enough so we now have to finish the year off strong and focus everything on next year. Late in the race I had a strange feeling through the wheel so I am glad we finished as I don’t know what it was. Congratulations to Jamie, with a drive like he had today he deserved to take the title here, though we still have a lot to play for as the runner-up position is still up for grabs.”

Will Davison – #6 Tradingpost FPR Ford
Qualifying: 2nd – 1m22.82s
Race Result: DNF – Fastest lap: 1m24.79s
“Our strategy was a big risk which we knew, but we looked at the numbers and the chances of a safety car after lap one is almost non-existent so we had a crack and nobody was brave enough to try it but us. Of course we then got a safety car at the wrong time, though at no point was the car in question in the way as it got going so we didn’t need it and it obviously killed the race which was frustrating. I’m disappointed that we didn’t get the result but we had a crack and that was it. It wasn’t much fun but we did the maximum we could.”

David Reynolds – #55 The Bottle-O FPR Ford
Qualifying: 7th – 1m23.11s
Race Result: 8th – Fastest lap: 1m24.83s
“I got an average start but our hard tyre pace was better even if we struggled more on the softs which cost us a couple of spots late in the race. I enjoyed today’s race as I had some great battles throughout and passed a few people. In the last five laps my tyres fell off the cliff and that was it.”

Tim Edwards – FPR Team Principal
“We did everything we could today but didn’t quite have the pace needed to win the race. Frosty qualified well, raced well and maximised his strategy and second place was all he could do so we have to be content with that. Dave enjoyed a much better day today, though the safety car really hurt Will’s strategy which hurt his day. We must congratulate Jamie Whincup and Triple Eight on winning the title. Both teams have had to rise to a new level this year and I know we’ve enjoyed the fight which I am certain will continue into 2013.”