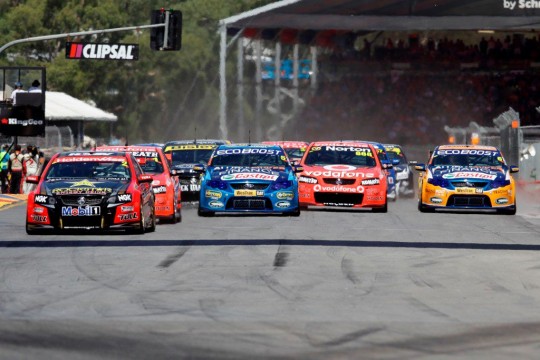 An Introduction to V8 Supercars

Phrases like competitive, fierce, action packed and heart pounding get thrown around far too often in motorsport, but the Australian V8 Supercars Championship series deliver everything it promises, everything motorsport should be … and then some! It really is some of the closest, intense and entertaining racing you’ll ever see. Plain and simple, V8 Supercars is the number one touring car series in the world.

Over the last decade the sport has seen an explosion of popularity. It has transformed itself from an Aussie provincial attraction to a truly global phenomenon, and it’s still growing. It’s reckoned that only Formula One and NASCAR now have a larger global audience. Almost 1.9 million attended the 15 Championship rounds in 2012, some events drawing crowds of over 200,000 over the course of the race weekend. A further 19 million watched on television in Australia alone, while the sport was broadcast into 137 countries around the world, with a potential reach approaching 500 million households.

Speak to an Australian and they won’t be the least bit surprised at this, they’ll just ask “what took you so long to catch on?!”

So what makes this championship series so special to have survived this long and to have grown where others have fallen away?

The Battle of Red versus Blue

While 2013 sees a new set of contenders, Ford and Holden shaped and divided a nation over more than two decades. To most people V8 Supercars was (still is) Holden versus Ford.

Since its beginnings in 1960 when it was known as the Australian Touring Car Championship (ATCC), there have been many different Championship winning marques, including Jaguar, Chevrolet, Mazda, BMW, Volvo and Nissan.

However, after Nissan won the last of its three straight titles in 1992 with the Skyline GT-R, the governing body decided to go back to basics, shifting strictly to V8 power. In 1995, the rules were then changed to specify that only two makes of cars could contest the Series – the (Australian built) Holden Commodore and the Ford Falcon.

This unique rivalry between the two marques, both off and on the circuit, immediately appealed to motor racing fans and the battle of red versus blue etched itself into the social fabric of Australia with a clear line drawn – you were either for the red lion of Holden or the blue oval of Ford.

That incredible rivalry spawned one of the legendary clashes of the Australian sporting world and truly captured the hearts and minds of Australian motorsport fans.

The year is 2013 and for the first time in 16 years, the Ford and Holden stranglehold is over.

New “Car of the Future” regulations have revolutionised the sport and opened the door to new manufacturers other than Ford and Holden.

2013 has seen the introduction of a new era of V8 Supercar with a factory-backed Nissan team and a privately funded AMG Mercedes-Benz E-Class team competing against the Holden and Ford teams, with Volvo confirmed taking to the grid too from 2014. Despite some initial aversion, these new players are vital to the sport’s future direction and should help assure its long-term expansion and viability.

The Holden versus Ford rivalry still remains, but other manufacturers have muscled in on the Australian automotive market replacing Holden and Ford as the best sellers. Exposure to more brands and other international motorsport events in Australia has meant the tribal aspect has become a lot more diluted. Fans now have their favourite drivers and teams, while many of the teams and drivers have also made the switch between manufacturers.

The highest standard of competitive racing

The rivalry on track is another endorsement of why V8 Supercars is well and truly in great shape. Not only is it the best touring car category in the world, but it’s also the most competitive too.

These high-performance V8 monsters are so closely matched there is more over-taking and side-by-side racing than most other motorsports series. The introduction of ‘Project Blueprint’ in 2003 truly put the cars on a truly level playing field. Using standardised parts the two different makes (Holden and Ford) were constructed as similar as possible within the rules in weight, aerodynamics, engine power and handling ability. And in 2013 as the new generation of cars takes over, it’s set to get even tighter. The ‘Car of the Future’ is based on a standardised platform which will ensure the technical equivalency between vehicles remains.

The idea is that the advantage goes to the best driver, not to the most expensively built car, and the rules for customising the cars guarantee that no one car or make of car will dominate the event.

It’s not unusual to see the top 20 cars qualify hundredths-of-a-second apart, with the entire field separated by just one second.

Fans appreciate races can run for several hours and hundreds of miles and still turn out to be epic, down to the wire battles – after 161 laps and more than six and a half hours of driving, the difference between winning and losing the 2011 Bathurst 1000 came down to just 0.292 seconds!

Ask any racing driver what Series they’d like to compete in and most will tell you the V8 Supercars. Here they get that chance. Although the Gold Coast 600 international co-driver format which required teams to run internationally renowned co-drivers has been scrapped for 2013 (to allow local co-drivers to compete and to save money for both the government and the teams), several of the biggest names in motorsport descended on Australia’s Gold Coast between 2010 and 2012 as part of the calendar’s endurance season. The V8 regulars partnered with these drivers of international repute to compete in a pair of 300km endurance races on the streets of Surfers Paradise. This was arguably the best field of drivers assembled for a touring car race each year. Drivers such as Dario Franchitti, Helio Castrovenes, Sebastien Bourdais, Andy Priaulx, Yvan Muller and Jacques Villeneuve have all had a crack at it.

Perhaps one of the biggest reasons that fans and drivers alike are drawn to V8 Supercars is because one of the most iconic races in the world is built into the category’s calendar – the legendary Bathurst 1000. The holy grail of Australian motorsport, known as “The Great Race”, takes place over 161 laps (1000km or 620 miles) over Australia’s most revered race track, the Mount Panorama Circuit in New South Wales, and winning it is the dream of many drivers across the world.

A bugbear of many motorsport fans watching their favourite series on television is the lack of action captured. Well, that certainly isn’t the case with V8 Supercars. The TV footage is probably only second to Formula One.

Trackside cameras, kerb-cams, helicopter shots and in-car views bring you all the action and drama as it happens. Cameras capture every angle and piece of on-track and off-track action at every round. There’s even a Tech Centre providing a great insight into the unfolding race and team strategies.

Coverage at the Bathurst 1000 is astonishing. In 2011, there were 169 cameras including 38 on-track, in concrete kerbs and walls; four in the pits and a total of 119 in-car cameras across the different categories. A helicopter camera and a 450-metre-long ‘fly-cam’ also covered the track from the pits to Hell Corner, travelling up to 160kph to provide incredible overhead views.

Even watching on television, the ground-trembling noise these killer horse-powered beasts make as they hurtle around the racetrack at speeds of close to 300kmh is incredible.The thundering, fire-fuelled soundtrack is just gobsmacking and needs to be heard to be believed!

Fans both overseas and local can now watch every race through a variety of mediums – online, on tablet devices or on their mobile phones. Subscription TV, online and mobile technology has opened up the Series to new audiences. Fans can subscribe to feeds which allows them to watch different combinations of real-time race data such as live dashboard, lap tracker, live timing.

New for 2013, V8SuperView is a new subscription-based digital streaming service enabling viewers to watch live, advert-free streaming of every race from the Championship as well as the Dunlop Series.

Although market pressures saw V8 Supercars forced to accept a cut-price condensed two-year deal on its new free-to-air television deal in 2013 to get off-schedule with revenue-seeking rivals the AFL (Australian Football League) and the NRL (National Rugby League) and their next round of television rights deals, reports had suggested both the free-to-air rights and the online broadcast rights could be worth Aus $300 million over five years.

In recent years the Series’ organisers began a determined push into overseas markets. The FIA’s decision in 2010 to grant the Series international status – meaning it can extend to another five destinations outside of Abu Dhabi, Australia and New Zealand – paved the way for expansion. With New Zealand already locked in and an inaugural trip to the United States this year, the organisers were targeting six international rounds by 2015 as part of their growth strategy with the likes of Mexico, Hong Kong, the Philippines, Singapore, Moscow and India all slated as possible venues.

Under the leadership of new CEO James Warburton, the pursuit of further international events will be parked as part of a “period of consolidation”. However, Warburton is determined that a shake-up of race formats next season such as the introduction of evening and night races will present a stronger series to sell as the championship prepares to negotiate its next television deal for 2015. The idea of racing under lights holds a big appeal to the fans in Australia, but will also attract a larger international audience with the broadcast screened at more presentable hours to those of us in the Northern Hemisphere.

Although the series needs a major sponsor, over the past couple of years it has announced several significant partnerships with the likes of Virgin Australia, Etihad Airways and Disney Pixar International. With the sport’s international status and appeal, adding these global companies to their portfolio of partners matches the huge potential growth and future of the sport.

It is a credit to the sport’s organisers whose vision, commitment and dedication to making what is already the best better for the race fans, shows just why the V8 Supercars is truly a sport on the rise on a global scale.