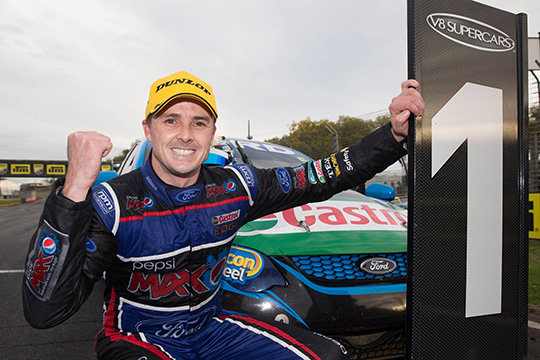 With his second race win of the weekend at Pukekohe Park Raceway, Mark Winterbottom has secured the prized Jason Richards Trophy and extended his lead in the V8 Supercars championship.

Starting from fourth, Winterbottom claimed the honours as he beat home hero Scott McLaughlin in the fourth and final race of the ITM 500 in Auckland. The Pepsi Max Crew FPR man leaves New Zealand with a 107-point lead over Red Bull Racing’s Craig Lowndes in the Drivers’ Standings.

“What an awesome race,” Pepsi Max Crew FPR’s Winterbottom said. “The car was really good and it may have been a bodgy start [but] I trucked on through.”

“My crew got me in front – which was awesome – and from there we just trucked on. 100-point leader, that’s really cool. I wanted to lead going away – not just last night – so that’s awesome, I’m wrapped.”

McLaughlin (Valvoline Racing GRM) claimed pole for the 200km race, putting him in a strong position to take the win and possibly the trophy if things were to go his way. As was the case in Race 12 yesterday, McLaughlin’s car’s performance seemed to fall off the longer it went into a run. Once the lights were extinguished, McLaughlin shot out ahead of the rest of the field with Shane van Gisbergen (Team Tekno VIP Petfoods) and David Reynolds (The Bottle-O Racing Team) slotting into second and third on the opening lap.

Winterbottom began to reel in the 20-year-old Kiwi in the mid-stages of the race – cutting his lead down to 0.8 seconds by Lap 33 and getting the jump on the pole-sitter in pit lane on Lap 42 as the pair pitted. Once Winterbottom emerged from pit lane it was smooth sailing from there.

McLaughlin was unable to mount a challenge and Winterbottom stretched his lead to 6.9 seconds at the conclusion of the 69-lap race.

Chaz Mostert rounded out the podium, his second in two days, capping off a great weekend for Ford Performance Racing.

Reynolds had been on pace for a top-five finish, but a left rear tyre failure on lap 44 saw him go off at Turn 1 and relegated to a 17th-place finish.

Having recorded a season-best qualifying, Supercheap Auto Racing’s Tim Slade was set to start from the front row alongside McLaughlin, but after completing the parade lap, Slade frantically waved to officials that his clutch was not working, leading to an aborted start. Race officials would shorten the race by one lap to 69 laps due to the field taking another formation lap and Slade would start from the pit lane, eventually finishing 21st.

The V8 Supercars series now takes a three-week break before heading off to the Barbagallo Raceway for the Perth 400, a Super Sprint event.