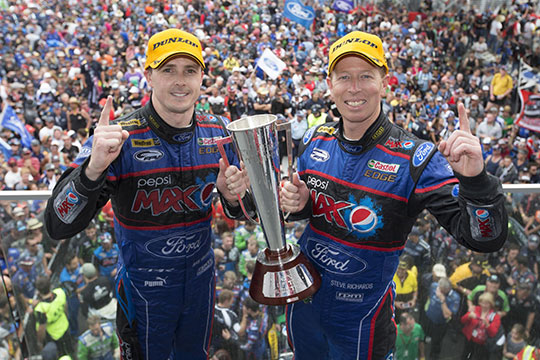 Winterbottom and co-driver Steve Richards held firm against Jamie Whincup and Paul Dumbrell having recovered from a poor start to move ahead of the Red Bull Racing Australia entry during the first safety car deployment on lap 86. Winterbottom then emerged as race leader on lap 138 with both having completed their mandatory seven stops, to set up an electrifying 20 lap sprint finish to the end.

With ten laps to go, five cars from four teams and split by just six seconds were all in contention, before Winterbottom and Whincup pulled clear of the chasing pack. In a last throw of the dice Whincup had a run on the Pepsi Max Crew FPR Ford at Griffin’s Bend on the final lap, but ran wide and lost ground, handing Winterbottom the win by just 0.47 of a second.

Behind the leaders, Lowndes, partnered by Warren Luff for his 20th Bathurst and 500th career start, won the frantic battle for third ahead of Gath Tander and Jason Bright. Running third after the final round of pit-stops, Bright was caught by Lowndes and Tander on the fresher rubber. On lap 151 Tander moved up the inside of Lowndes at Turn 2 and made it stick for fourth before trying to muscle his way past Bright a lap later. Bright held Tander at bay but on lap 157, Tander swooped down the inside of Bright and the pair both dropped a wheel at The Chase, gifting Lowndes third place.

Bright then temporarily lost fifth to David Reynolds, before regaining the spot when Reynolds had to pit the Bottle-O Ford for a splash-and-dash fuel stop.

Scott Pye put all the talk about next season to one side with a superb drive alongside co-driver Paul Morris to bring the Sargent Security Racing Holden home in sixth and secure Lucas Dumbrell Motorsport’s best result of the season so far.

Pepsi Max Crew FPR duo Will Davison and Steve Owen finished in seventh, with Fujitsu Racing GRM’s Scott McLaughlin and Jack Perkins taking eighth ahead of Reynolds and Canto who lost out after the extra stop for fuel.

The Xbox One Racing wildcard entry of Andy Priaulx and Mattias Ekström rounded out the top 10. The international pairing had earlier looked on course for a podium finish after two stellar drives which saw both drivers leading stages of the race. However, shortly after taking over from Ekström on lap 135, Priaulx reported a “big vibration” and pitted for four new tyres, which dropped them out of contention.

Incredibly, there were only two safety car appearances, the first coming on lap 20 after David Russell behind the wheel of the Jack Daniel’s Nissan Altima hit a kangaroo at Turn 2, breaking the front cross member. Unable to rejoin the race, the team retired the car without Todd Kelly even turning a lap. The second came on lap 86 when Greg Murphy lost the rear and crashed heavily into the wall at Reid Park at 135km/h, ending the day for the Holden Racing Team duo.

The Championship now moves to Surfers Paradise for the final round of the PIRTEK Enduro Cup, the Gold Coast 600 in two weeks’ time.