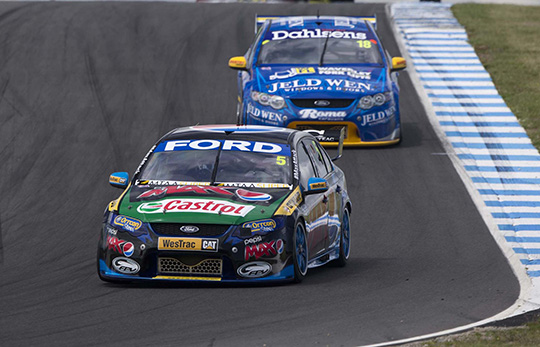 Mark Winterbottom has claimed pole position for Saturday’s opening race on a day of changeable conditions at the Sargent Security 360 on Phillip Island.

Times in the twenty minute session dropped by more than ten seconds as the track dried after rain fell during morning practice. Timing his run to perfection, Winterbottom set a new lap record (1.30.610) for the track on his final lap, lowering the mark of Ford teammate Alex Davison, set in yesterday’s final practice.

The varying conditions saw several drivers slip of the track in the damp. Fabian Coulthard toured the grass at turn one, sliding through the gravel trap where he managed to salvage the car avoiding a red flag. Coulthard ended the session in sixth position.

The biggest casualty of the day was Jamie Whincup who also slipped off at Turn 2, and could only manage 13th place, a full second back on his title rivals.