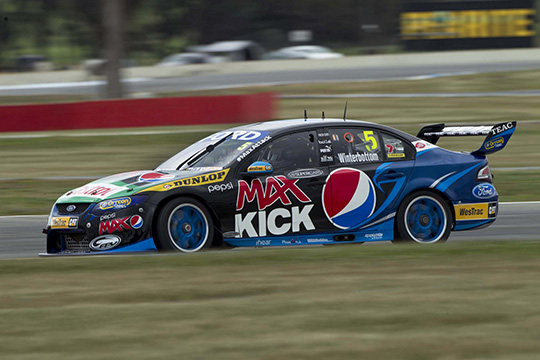 Mark Winterbottom is back in the title chase after wining Sunday’s opening race of the Winton 360.

In his 300th race start, Winterbottom, starting from third jumped front row starters Jason Bright (Team BOC) and Tony D’Alberto (Team Hiflex) into the first corner and remained at the head of the field for the thirty-four lap race.

Bright edged ever closer to the rear wing of Winterbottom’s Ford in the dying laps, the pair just 0.4s apart over the line, while James Courtney deprived D’Alberto for third with eight laps remaining.

There was no doubt about the race’s big talking point however, after Championship leader Jamie Whincup recorded a second failure to finish of the weekend.

Starting from 18th on the grid after a tailshaft vibration issue in qualifying, Whincup was the victim of an lap one crash caused by Fujitsu Racing GRM’s Alexandre Prémat.

Prémat ran across the grass at Turn One causing a chain reaction with Alex Davison (Team Jeld-wen FPR), Jamie Whincup and Russell Ingall all coming together as they tried to avoid the re-joining Frenchman. Michael Caruso (Norton 360 Racing) and Garth Tander (Holden Racing Team) were also involved in the chaos, with all but Davison heading into the pits to assess the damage to their cars, while the Safety car was brought out to remove Russell Ingall’s Supercheap Auto Racing Holden after he hit the wall on the exit of the corner.

The Red Bull team were able to repair the damage to Whincup’s right front suspension and get him back out on track on lap five. He made two more trips through pit lane, replacing damaged front tyres, until the car was retired on lap twenty-seven, and having completed only twenty laps, was not classified for points.

Ingall and Premat both retired due to damage, and it’s unlikely that Ingall will be able to take the start in race two. Caruso returned to the track, however was back in the pits on lap five. He later re-joined the race on lap twenty-one but was not classified as a finisher.

Jonathon Webb (Team Tekno Darrell Lea) was forced into the lane on lap seventeen with a stuck throttle, returning to the track on lap twenty-three.

On lap twenty-seven Tim Blanchard (Wilson Security Racing) ran off the track at turn five, sliding across the infield and ending up back on track in the region of turn seven. He quickly redressed and gave back the spots gained, although he was shown a Black Flag for blocking Alex Davison in subsequent laps.

Despite two DNFs Whincup holds onto his championship lead on 1803 points with Craig Lowndes (Red Bull Racing Australia) 55 points back after his 12th place finish. Winterbottom has shifted into third, 62 points behind. Will Davison sits fourth 79 points adrift and Bright is fifth, 154 points off the lead.