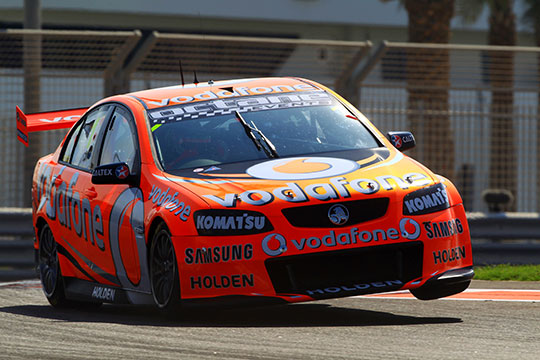 TeamVodafone’s Jamie Whincup has not only celebrated his 61st and 62nd career race wins in today’s two races at Abu Dhabi’s Yas Marina Circuit, but his Holden chassis 888-023 known as ‘Kate’ is now the most winning individual race car in the history of the Australian Touring Car Championship/ V8 Supercar Championship Series since 1960.

Holding his position off the line in today’s opening race, Whincup made a bold move on race leader Will Davison into Turn 9. The #1 driver moved into the lead and greeted the chequered flag over four seconds ahead of Davison.

The Championship leader got another solid start in Race 25 of the V8 Supercar Championship Series, moving into the lead off the line and controlling the race for the entire 12-laps.

Craig Lowndes had a tumultuous day, the #888 driver made a strong start to today’s opening race, gaining three positions off the line to move into sixth. Lowndes lost a spot to Garth Tander on Lap 2 and the TeamVodafone driver ran wide into Turn 8 on Lap 10, opening the door for Mark Winterbottom to get through.  Lowndes eventually finished the race eighth.

After dropping a position off the start in Saturday’s second and final race, Lowndes pressured 12th placed James Courtney to regain track position. Lowndes moved past Courtney on Lap 2 and gained another position on Lap 5 before finishing the race 11th.