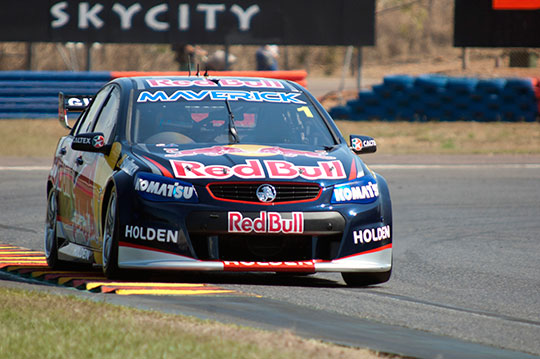 Jamie Whincup has claimed victory in the opening race at Darwin steering clear of the second half carnage to post his seventh victory of the season.

In the first half of the 60/60 sprint format, Whincup jumped pole-sitter David Reynolds off the line, but ran wide at the turn six hair pin, handing the lead back to the Bottle-0 FPR Ford man, who accelerated clear of the field to lead at the ‘half time’ break.

In the start of what was to be a torrid day for the Ford Performance stable, the Pepsi Max Crew duo battled it out over the course of the first half race with Will Davison passing teammate Mark Winterbottom for third in the opening lap, before Winterbottom reversed the positions on lap 11 to reclaim third position.

After a poor shoot-out lap in qualifying, Craig Lowndes starting from tenth position quickly gained two spots, passing Shane Van Gisbergen (Team Tekno VIP) and Rick Kelly (Jack Daniels Racing) over the first three laps. The Red Bull Racing Australia was soon on the move again, working his way to fifth with a late move on Garth Tander (Holden Racing Team) to put himself on the inside for the restart.

Rick Kelly was seen to have excessive smoke pouring from the car in what the team described as ‘oil temperature issues.’ Race control opted to watch the situation play out, rather than award a mechanical black flag and as the race progressed the issue seemed to resolve itself.

Lee Holdsworth (Irwin Racing) was involved in an incident on lap three and was spun around approaching the hairpin. He re-joined the race unscathed but down the order, just ahead of Todd Kelly (Jack Daniels Racing) who had contact with the Ford of Alex Davison (Team Jeldwen FPR) on lap one. Stewards are investigating the incident.

After the double-file rolling restart, Whincup took the lead from Reynolds going around the outside through Turn 1. Behind the leading pair, the race turned to carnage when Will Davison was turned around at the turn six hairpin, causing mayhem behind. The incident appeared to be a result of Lowndes locking up and sliding into Tander, shoving him into Will Davison and sending the FPR car into a spin. Lowndes pitted with damage to his bonnet, while Tim Blanchard (Wilson Security Racing) veered off track a few corners later parking up on the side of the track and bringing out the safety car. Stewards announced a post-race investigation into the Lowndes/Tander incident. Despite heavy damage to his car, Davison continued to circulate mid pack until he was forced to retire shortly thereafter, while battered and bruised Tander and Lowndes managed to finish 13th and 26th.

After several laps under safety car, the race got back underway. A lively battle brewed between stable-mates Reynolds in second and Winterbottom in third which came to a head when Winterbottom slewed into the side of Reynolds at turn six, spinning the Bottle-O Ford around. The reaction from the stewards was immediate, with Winterbottom being issued a drive through penalty, dropping him to 22nd place, eight positions behind Reynolds at the flag.

Tekno Team VIP’s Shane van Gisbergen was handed second on a plate as the FPR pair tangled, but Whincup proved unbeatable in the closing laps holding off the fast finishing Van Gisbergen with Courtney rounding out the podium. Tekno Autosports’ Jonathon Webb was the best of the rest in fourth, with Rick Kelly in fifth. In a standout performance, Tim Slade (Heavy Haulage Australia Racing) claimed Erebus Motorsport’s first top ten finish in sixth, followed by Chaz Mostert in a career-best seventh, while Bright, Tony D’Alberto (Team Hiflex) and Michael Caruso (Norton 360 Racing) rounded out the ten.

The V8 Supercars are back on the Hidden Valley track tomorrow in Darwin at 0955 local time for the first of two qualifying sessions ahead of two 120km races in the afternoon.