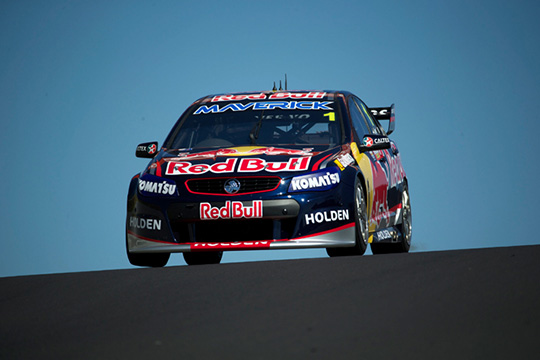 Jamie Whincup has scored his first ever Supercheap Auto Bathurst 1000 pole after a stunning Top-10 Shootout at Mount Panorama.

After clinching provisional pole in yesterdays session, Whincup, the last driver out, lit up the timing sectors with three greens and a lap time of 2:07.882, to deny Mark Winterbottom by two-tenths of a second.

The only driver in the ‘2:07s; Whincup’s pole position also marks the 50th of his V8 Supercars career equalling Peter Brock’s record.

The second row of the grid belongs to Team BOC’s Jason Bright and Shane Van Gisbergen. Down in the first two sectors, Bright outgunned the Team Tekno VIP driver in the last to go third.

Despite a big moment through The Cutting, Holden Racing Team’s James Courtney lines up in fifth, while Craig Lowndes, unable to match his Red Bull Racing Australia team-mate, starts sixth.

Pepsi Max Crew FPR’s Will Davison is next up in seventh, alongside Scott McLaughlin (Fujitsu Racing GRM) in eighth. Last year’s runner up David Reynolds will start ninth sharing the fifth row with Alexandre Prémat who starts from tenth.