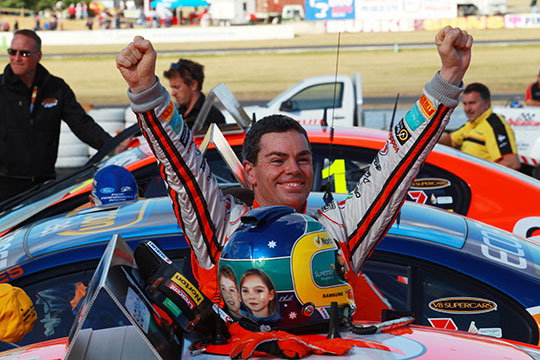 TeamVodafone’s Jamie Whincup has all but secured the 2012 V8 Supercars Championship Series with a 317 point lead ahead of second placed Mark Winterbottom.

Whincup dominated this morning’s 20 minute qualifying session, the Holden driver securing pole position for the seventh time this season with Ford driver Will Davison just two hundredths of a second behind.

Lowndes wasn’t far behind his teammate in Qualifying, finishing the session fourth only two tenths of a second off pole.

Driving consistently for the first 15 laps, Lowndes was called in for his first pitstop during a Safety Car period for James Moffat.

Both TeamVodafone Commodores pit and Lowndes was forced to queue behind teammate Whincup.

With the pitstop costing Lowndes four positions, the #888 TeamVodafone driver used the remaining 52 laps to climb up the field. Lowndes recorded his 88th career win and 42nd ’round’ win which now sees him tied with Mark Skaife.

Starting the 67-lap race on hard compound tyres, Whincup held the lead off the line but shortly fell to second with Will Davison on soft tyres until the Safety Car period.

Whincup pit and switched to the soft tyre compound tyres but once out on the track was given a Drive Through Penalty for spinning the wheels while the car was up on jacks during the pitstop, dropping the #1 Holden pilot back to 22nd.

Whincup produced an awe-inspiring drive and charged up the order to regain 19 positions, finishing on the podium in third and claiming the 2012 V8 Supercar Championship.

Whincup’s Championship victory is the first time since 2002 – when Mark Skaife won his fifth crown – that the V8 Supercars Championship hasn’t gone down to the last event.

TeamVodafone have also secured the 2012 Champion Team Award at Winton and have won the team’s title for the fourth time in the last five seasons.

Of the 28 V8 Supercar races held this year, TeamVodafone has had at least one driver on the podium in all but two of them (Adelaide Race 2, Phillip Island Race 10), with ten of those race having both Lowndes and Whincup on the podium together.

TeamVodafone now heads back to their Brisbane-based Head Quarters to prepare for the final 2012 V8 Supercars Event, the Sydney Telstra 500 which takes place from November 30-December 2.