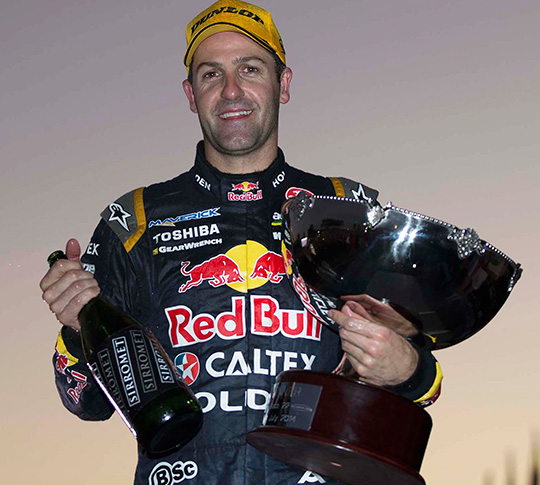 Jamie Whincup’s championship is well and truly back on track after winning the pit-stop strategy dominated Castrol Townsville 500 finale.

Whincup led home an all-Holden podium ahead Garth Tander and Shane van Gisbergen at the end of the 250km race to narrow the gap on championship leader Mark Winterbottom to just 94 points following his second win of the weekend.

Alternate strategies saw both Whincup and Tander hold strong leads at different times of the race until they finally met head to head on lap 70 after the final round of pit-stops.

The Red Bull Holden driver was one of just six drivers choosing not to pit under the Safety Car on the opening lap, leaving him with 15-lap fresher rubber when he rejoined from his final stop just five seconds behind the #2 HRT Commodore. Tander was able to put a bit of a fight but ultimately Saturday’s race two winner succumbed to Whincup’s fresher tyres.

At one stage it looked like Holden Racing Team would take the final two spots on the podium as James Courtney and Nick Percat battled for third place in the later stages of the race. it was Tekno Autosports’ Shane van Gisbergen, however who charged into third place after switching to a three-stop strategy and benefiting from the better pace over the closing laps.

Behind Courtney and Percat, Ford Pepsi Max Crew’s Winterbottom was the first non-Holden finisher in sixth after an average qualifying run saw him miss the shootout and start from twelfth. His Ford Performance Racing teammate Chaz Mostert followed him home in seventh.

Scott Pye was able to make up nine positions to come from seventeenth to eighth in the Wilson Security Falcon.

Moving in the opposite direction was the Volvo of Scott McLaughlin as he was forced to settle for ninth after the speed that secured a fourth place in the shootout eluded him in the race.

Erebus Motorsport rounded out the top ten with Will Davison staying out of trouble today in his E63 Mercedes AMG.

Nissan Motorsport just missed out on a top ten finish with Michael Caruso finishing in eleventh.

Pole sitter Jason Bright’s bad luck continued after a spinning wheel on the Team BOC Commodore during a pit stop resulted in a pit lane penalty, effectively ending any chance he had of getting a good result.

Bright managed to avoid being the unluckiest guy in the field however as Craig Lowndes’ horrid weekend degenerated even further. The Red Bull Racing Commodore struggled with and overheating issue due to a water leak forcing him in for multiple pit stops throughout the race. Lowndes eventually limped home 8 laps off the pace in 23rd, resulting in a loss of four places over the weekend to sixth in the drivers’ standings.

Red Bull’s woes will continue after the race as well. The Red Bull car controller was spotted moving a stray tyre during a pit stop which will be investigated post-race.

Robert Dahlgren will also be subject to a post-race investigation after crossing the pit entry line.
The race was incident free with the exception of a lap one altercation that took Dale Wood and Jack Perkins out of the race.

Winterbottom retains his championship lead over Jamie Whincup heading into the next round at Queensland Raceway on the 1-3 of August.