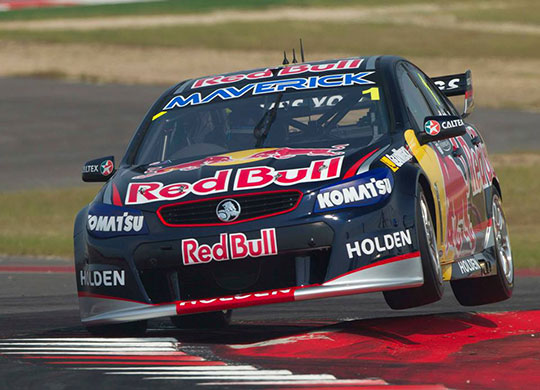 Jamie Whincup showed his intent to further add to his strong V8 Supercars international record and leave the inaugural trip to the US with another trophy haul, taking pole in both of Sunday’s qualifying sessions of the Austin 400.

After winning the opening two races on Saturday, the Red Bull Racing Australia driver will start from pole for both 100km races at the Circuit of the Americas after dominating qualifying.

In the first of the two back-to-back 15-minute qualifiers, Whincup immediately set the early marker. His time of 1:32.5796 stood until two minutes to go, when team-mate Lowndes signalled his intentions with the fastest two sectors, and even a small mistake going into the third wasn’t enough to prevent him taking the provisional top spot with a 1:32.5504. However, Whincup coolly responded with a time of 1:32.1034, a full four tenths quicker to top the timesheets.

In an incredible end to the second session, five different drivers went to the top of the timing board over the final 90 seconds. Again though, it was Whincup who eclipsed the field, needing just one green tyre lap to land pole ahead of Coulthard and Tander for Race 16 and posting the weekend’s fastest time in the process. His time of 1:31.9948 makes him the first, and only driver to go sub 1m 32s.

Bright looked likely to beat that time, going 0.1 up into the final sector, but he locked up into Turn 19 and dropped to fourth.