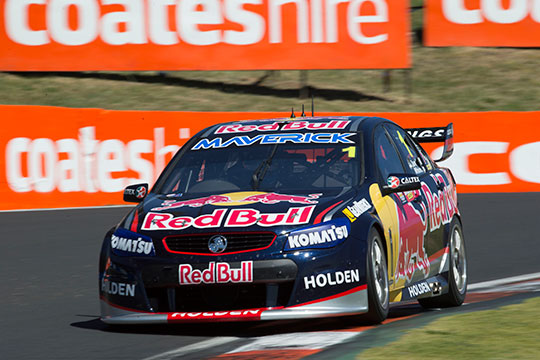 Defending Bathurst champions Jamie Whincup and Paul Dumbrell have put themselves in the box seat to claim back to back titles with Whincup qualifying the car on provisional pole for Sunday’s Supercheap Auto Bathurst 1000.

The closely contended qualifying session ran uninterrupted, and set the grid from positions eleven to twenty-nine, while just 0.5s covered the top 10, who will go on to fight it out in the Shootout on Saturday to determine the final grid positions for the 161-lap race.

After making early errors, an off at the Chase and a brush with the wall across the top of the Mountain, Red Bull Racing’s Whincup recovered to set an unbeatable time of 2.08.0054, just 0.0558s quicker than Pepsi Max Crew FPR’s Mark Winterbottom.

Last year’s runner up David Reynolds (The Bottle-o FPR Ford) was eighth. Having followed Whincup into the 2.08 bracket in the early stages of the session, his time stood for much of the session until Whincup on an absolute flyer took almost 0.45s off the benchmark time.

The two Gary Rogers Motorsport entries of Scott McLaughlin and Alex Premat were last minute inclusions into the top ten, taking ninth and tenth respectively after the chequered flag flew.

Two co-drivers were given the job of qualifying the cars, Steve Johnson subbed for rookie Maro Engel in the SP Tools entry, and Mattias Ekstrom was handed qualifying duties in the Xbox One machine after finishing third in this morning’s Co-Driver only session. After briefly spending time in the top ten, Ekstrom ultimately qualified 18th, with Johnson taking 16th.

Lee Holdsworth was the top qualifying Erebus Mercedes, knocked out of the top ten along with Garth Tander as the GRM pair slotted in. Tander will start eleventh and Holdsworth twelfth.

Two cars were unable to make the session, Tim Slade’s #47 Heavy Haulage Australia Erebus Mercedes was still being repaired after crashing heavily in the early laps of Thursday’s third practice session, and Chaz Mostert’s Greens’-Tuf Falcon following a sickening crash in the final Practice session. Both teams are rushing to repair the car, with spare parts for Slade’s car arriving at Bathurst mid-afternoon.