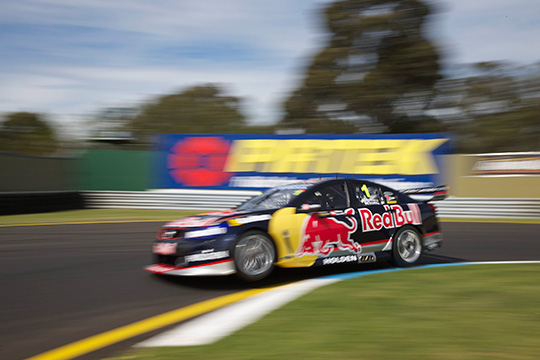 Paul Dumbrell will start the Sandown 500 co-driver qualifying race from pole after a record breaking performance in the open qualifying session by Jamie Whincup.

In the morning’s practice session Whincup reset the practice lap record, set only yesterday by Red Bull Racing Australia team-mate Craig Lowndes to 1.08.666. His blistering pace continued into the qualifying session when, on the first flying laps, he broke his 2009 qualifying record, previously 1.09.667, to 1.08.901.

As the session entered its final minutes a challenger emerged in Will Davison (Pepsi Max Crew FPR), the Ford driver taking 0.15 seconds off the time, but with just over a minute remaining, Whincup returned to the top of the timesheets with an impressive time of 1.08.620.

Alongside Dumbrell will be Dale Wood, after Wilson Security DJR’s Chaz Mostert left it late to post a time just 0.09s short of the top spot.

The Erebus Motorsport cars continued their strong performance from the weekend, with Lee Holdsworth (Irwin Racing) as high as third midway through the session. At the conclusion, he sat in eleventh, with one car separating Holdsworth and departing teammate Tim Slade (Heavy Haulage Australia Racing). Maro Engel (SP Tools racing finished the session in twenty-third.

Two 60km races follow setting the grid for Sunday’s Sandown 500. The Sprint for the Grid part one for Co-drivers only, starts at 1445 local time.