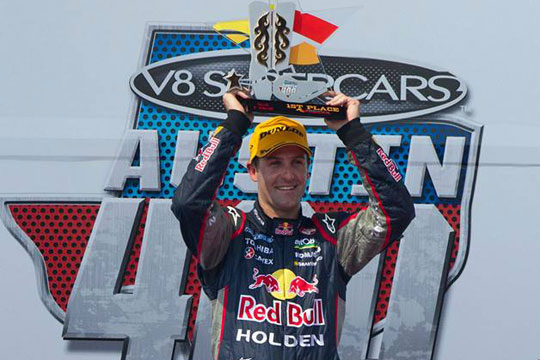 Jamie Whincup has capped off a stellar weekend with victory in the final race of the Austin 400 at the Circuit of the Americas.

Bouncing back from his race three defeat, the Red Bull Racing driver led away from pole with Coulthard, the race three winner in close attendance. Fending off the Lockwood Racing driver’s challenge he went on to pull out a three-second gap, leading home the Kiwi duo of Fabian Coulthard (Lockwood Racing) and Shane Van Gisbergen (Team Tekno VIP) and further extending his Championship points lead.

The race restarted on lap ten and through the opening corners James Courtney (Holden Racing Team) hit the rear wing of Michael Caruso (Norton 360 Racing), spinning the Nissan driver a full 360 degrees before he re-joined at the rear of the field. The mid pack chaos allowed leaders Whincup and Coulthard to open a margin over the rest of the field as they battled for the lead of the race.

Pit lane again opened on lap ten for drivers to complete their compulsory tyre stops. In the hive of activity a merging Jonathon Webb (Team Tekno Darrell Lea) made contact with SP Tools Racing’s Maro Engel as he attempted to pull into his pit bay. After completing his stop Engel failed to merge into the fast lane correctly, driving around the left side of the cone, earning himself a drive through penalty for the infringement.

Coulthard was the first of the leaders to pit, with Whincup stopping a lap later. A tardy take-off by Whincup saw him re-enter the track just ahead of an at-speed Coulthard, managing to keep the charging driver at bay despite having cold rear tyres.

As the laps ticked down, Garth Tander (Holden Racing Team) and Van Gisbergen were locked in a tight battle for the final step of the Austin 400 podium. The charging Red Bull of Craig Lowndes also looked to be buying in on the fight, showing great pace after qualifying outside the top ten.

Jason Bright (Team BOC) looked best placed towards the end of the race, having conserved tyres throughout the previous three races he was left with four high quality bits of rubber for his final assault on the leaders. Again his strategy was to run long and pitting from the lead he emerged in twelfth, picking his way through the pack to finish inside the top ten.

A change in position in the V8 Supercars Championship race sees Craig Lowndes overtake Will Davison for second position 142 points behind Whincup, currently sitting on 1247 points. Will Davison is 218 points back followed by the Brad Jones Racing pair of Fabian Coulthard, 263 down, and Jason Bright rounding out the top five 302 points adrift.

The V8 Supercars are next on track in Darwin for the Sky City Triple Crown from 14 – 16 June.