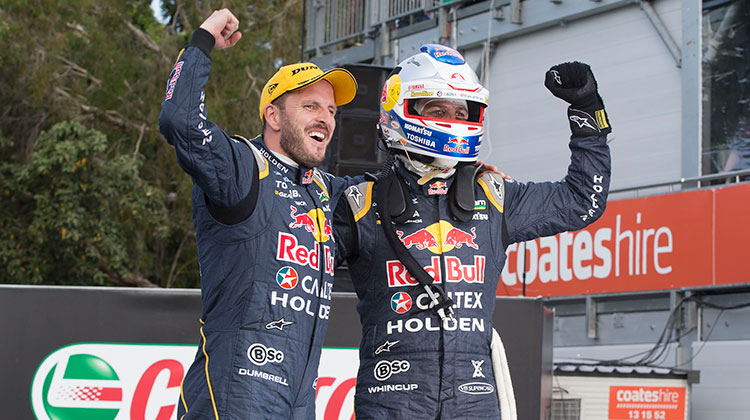 Jamie Whincup and Paul Dumbrell have claimed the Pirtek Endurance Cup after winning the final race of the Gold Coast 600.

Despite a couple of mid race safety cars bunching the field up the pair were largely unchallenged for much of the race and crossed the line with a comfortable 3 second advantage.

Unable to catch Whincup the chasing Volvo of Scott McLaughlin and Alexandre Prémat claimed second after having to defend from the hard charging Nissan of Michael Caruso. These results saw Prémat and Caruso’s co-driver Dean Fiore claim their first ever V8 Supercars podium finishes.

Tim Slade and Tony D’Alberto capped off a solid weekend in the Supercheap Auto Commodore with a fourth place finish.

Shane van Gisbergen followed in fifth despite receiving a pit lane penalty for overlapping with McLaughlin before the safety car came in. The Tekno Autosports car showed great car speed to drag itself back through the field, but missed out on challenging for the win due to the infringement.

The Bottle-O Racing Team put in a massive effort just to get the car to the grid after it suffered massive damage in yesterday’s race. David Reynolds and Dean Canto rewarded the team as the highest place Ford Performance Racing car in sixth.

The rest of the top ten was made up by cars who had made huge gains throughout the race They were led by Fabian Coulthard and co-driver Luke Youlden who overcame a disappointing qualifying position of 17th to finish seventh.

Russell Ingall and Tim Blanchard echoed Lockwood Racing’s strong performance with a charge through the field from twenty-third to bring home the Repair Management Australia Racing Commodore in eighth.

The second Nissan in the top ten came from 20th to ninth in the hands of Rick Kelly and David Russell.

Rounding out the top ten was the HHA Commodore of Nick Percat and Oliver Gavin.

Again finishing outside the top ten was Craig Lowndes in the second Red Bull Racing Commodore which sees him lose third place in the championship to Van Gisbergen.

Mark Winterbottom’s championship bid also suffered after he ran out of fuel in the remaining laps and dropped from eighth to 14th.

Despite the amount of damage sustained across the field only three cars failed to finish. Craig Baird and Lee Holdsworth retired with suspension damage after contact with the Volvo of Robert Dahlgren and Greg Ritter sent them into the wall. The Dahlgren/Ritter car served a pit lane penalty for its trouble.

Dale Wood and Chris Pither were the next drivers to drop out after their Team Advam/GB Commodore threw an engine belt.

It was Nissan Motorsport’s Michael Caruso however who suffered the most damage after collecting the concrete wall at Turn 11 putting an end to his race.

The series reconvenes for the second to last round of the season at Phillip Island on 14-16 November.