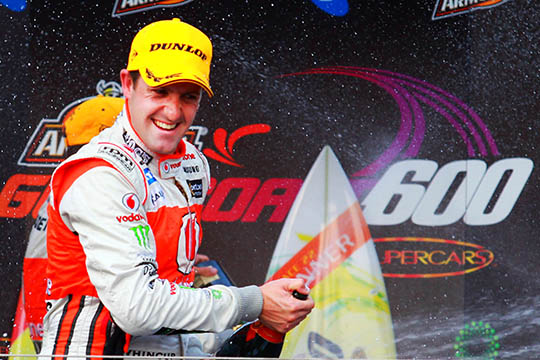 Bourdais was tasked with starting the 300km race but a massive shunt off the line saw the race red flagged.

The race was forced into a second restart after another start line incident saw a stalled car end up in a multi-car pile up.

After successfully avoiding the two melee’s, Bourdais battled with Ford rival Mika Salo for the lead, falling to second second as they approached Turn 1.

A slick stop on Lap 32 put Whincup in the #1 TeamVodafone Commodore. The defending Champion moved into the race lead on Lap 49 after Ford driver Will Davison made contact with the wall at Turn 11.

After Lowndes qualified 13th, Lyons was thrown amongst the madness, narrowly avoiding both shunts and circulating cleanly before handing the #888 Commodore to Lowndes on Lap 38.

Lowndes powered through the field and was able to gain seven spots from his starting position to end the race sixth.

The reigning Champion has extended his lead in the 2012 V8 Supercar Championship Series and now sits 209 points ahead of Lowndes who is tied on 2713 points with Ford rival Mark Winterbottom.