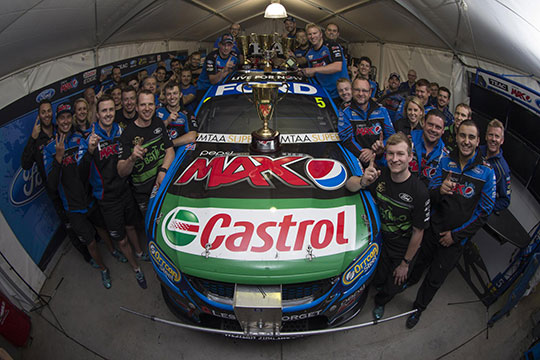 In the wake of news that rivals Holden will continue its partnership with Red Bull Racing Australia in the coming years, Ford is now the only manufacturer still to confirm its commitment to the sport beyond 2014.

Ford’s future in V8 Supercars is still up in the air after the manufacturer announced in 2013 that it is to cease operating in Australia by 2016 and retire the Falcon name.

Ford’s contract with factory team, Ford Performance Racing (FPR) whose driver Mark Winterbottom currently leads the Drivers’ Championship, is also set to expire at the end of this season.

Warburton, however, believes Ford will re-commit to its long-standing relationship with FPR at least in the short term, with talks between FPR, Ford and V8 Supercars currently underway.

Warburton explained his confidence in a News Limited article, assuring that V8 Supercars “have developed good working relationships with all existing manufacturers and have constant, open and transparent dialogue whether it is in regards to parity or around the business and the opportunities for the brands to use our platform.”

Warburton has also confirmed that V8 Supercars are also pursuing “a number of non-participating brands in relation to the next phase of our future.”

FPR owner Rod Nash verified that talks with Ford are underway, telling News Limited that FPR “have had some great dialogue with Ford this year and it is ongoing.”

“Now the dust has settled on all the manufacturers making their statements with regard to futures and manufacturing platforms, the path should be clear,” said Nash.

Nash notes that both brands are in a similar position but still see the value in the sport.

“Holden are moving manufacturing just like Ford and they see more value than ever. There is no question that it reinforces what the V8 brand is all about,” said Nash.

“Our brand is strong and our sport is good. Even after all the turmoil with the GFC [Global Financial Crisis] and car industry manufacturing business, all these big brands are still here.”

Nash also added that a decision on a replacement model for the Falcon which will be dropped from Ford’s line-up in 2016, is still to be made.

“Ford have a lot of stuff going on and it is quite complex when it comes to what the body might be based on,” he said.

“That is a subject in its own right.”