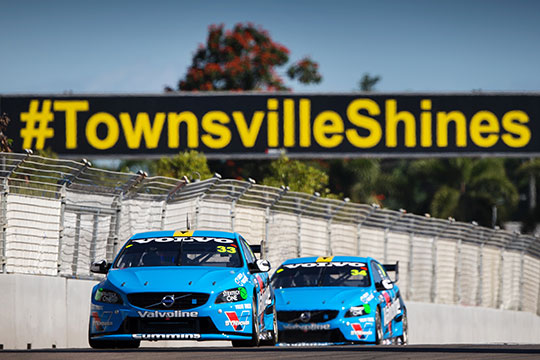 Volvo may be looking to field more than two cars in next year’s V8 Supercars Championship, according to Volvo Car Australia chief Matt Braid.

Former Holden team, Garry Rogers Motorsport has overseen a successful return to the championship for the Swedish marque which has already seen it claim a championship race win in its maiden season.

Currently campaigning two factory-backed Volvo S60 Polestar entries, Volvo has already expressed a desire to expand before, and according to Braid “[they] are getting pretty close to that time” where a decision about 2015 will have to be made.

“We are on record that going for a championship you need more than two cars on the grid, so ideally it would be great to have another two cars,” Braid told Speedcafe.com.

“It’s a case of considering what the options are and at the moment we are not doing any more than that.

“If we were to do it it’s a case of who’s around, what’s on offer and is there a commercial situation to help us here or not?”

The desire to expand its presence in only the brand’s second year in the championship comes after Braid recently announced Volvo’s V8 Supercars campaign success has had a direct effect on showroom sales, with a 60 per cent increase in sales of the road-going S60 sedan recorded.

Braid did not indicate whether the additional cars would also be run under Garry Rogers Motorsport, leaving open the possibility for an external team to enter Volvos in the 2015 championship.

However, he did confirm that Volvo is not keen on adding any more factory prepared cars.

“One thing I can say is it won’t be a case of us offering another team two (factory funded) cars,” Braid said.

“It’s got to be something that fits into our program which would require the level of performance we would expect and promote the brand at the same time as well.

“If we can’t do that or can’t find that in the time frame then obviously we won’t move forward.

“At the moment were are doing nothing more than entertaining some discussions and seeing what options are on the table for next year.”