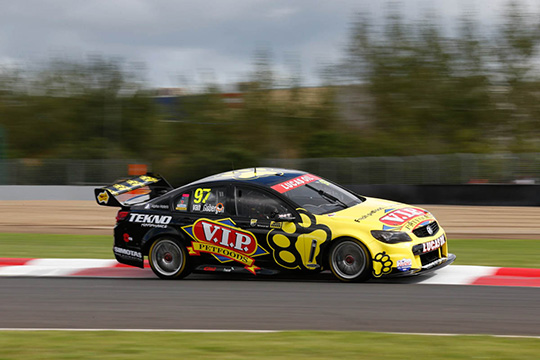 Shane van Gisbergen brought the home crowd to its feet as he claimed his first race win of the season in front of 35,000 fans in the third race of the ITM 500.

Starting from fourth on the grid, it took just eight laps for the 25-year-old to capture the lead and despite pressure from Mark Winterbottom over the closing laps, the Auckland native took to the top step for his second victory on home soil, after victory in Hamilton in 2011.

“That was awesome,” van Gisbergen said. “I had to get pretty aggressive at the start, Scotty’s [McLaughlin] spaceship is just so quick down the straight, so we had to get him.

“Mark [Winterbottom] was coming at the end, but I’m just so stoked for everyone here.”

Polesitter Scott McLaughlin (Valvoline Racing GRM) engaged in a fantastic battle with Jamie Whincup (Red Bull Racing Australia) as the lights extinguished on the grid. Whincup prevailed at Turn 1 but McLaughlin charged right back around the five-time series champion to retake the lead just as a safety car period was called.

Jason Bright (Team BOC) brought out the safety car on the first lap after going off the circuit at Turn 4, colliding with the barrier in an impact that left his #8 Commodore with heavy front-end damage. Bright was able to fire his car back up and return to the pits – albeit with severe damage to the car’s left front fender, eventually finishing 23rd. After a penalty in Race 11 earlier in the day, this incident in Race 12 may have sent Bright’s chances to defend his Jason Richards Memorial Trophy up in smoke.

McLaughlin then got a great jump on Whincup as he led the field back at the green flag on Lap 4. As the #33 Volvo pulled away from the five-time champion, Whincup fell into the clutches of van Gisbergen, who pulled off a brilliant pass in Turn 5 to move up to second.

From there, van Gisbergen continued to reel in his fellow Kiwi, setting fastest lap after fastest lap. By Lap 8, the #97 Commodore found itself glued to the back bumper of the leader before sliding past him in dramatic fashion in Turn 5. McLaughlin’s efforts to repass van Gisbergen were in vain and the #97 car began to pull away.

By Lap 18, Winterbottom’s (Pepsi Max Crew FPR) Falcon came to life as he moved past Whincup for third. By Lap 21, Winterbottom had already tracked down McLaughin, ultimately passing him five laps later. The Race 11 winner took off like a rocket in pursuit of van Gisbergen, shaving tenths of a second from the Kiwi’s lead with each successive lap. At the conclusion of the race, Winterbottom was right on the tail of van Gisbergen but was unable to get into a position to attempt a pass.