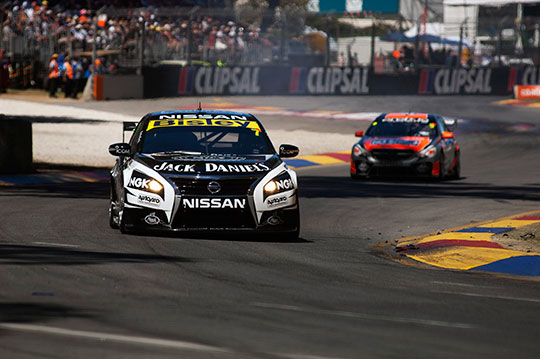 V8 Supercars will trial a revised fuel blend in the Nissan and Mercedes entries at this weekend’s Winton 360 in an effort to even the fuel consumption between the four manufacturers.

The V8 Supercars presently use E85 fuel, a mixture of 85% ethanol and 15% petrol, but two of the Nissan Altimas and one of the AMG E63 Supercars will run on a slightly lower ethanol ratio, which the category says, will offer no power or performance advantage.

The Nissan Motorsport Altima and Erebus Motorsport V8 Mercedes-Benz E63 AMG entries use double-overhead-cam four valve engines, but both have fallen short of the fuel consumption figures seen in the two-valve pushrod Holden Commodores and Ford Falcon engines, leaving them at a disadvantage in terms of fuel economy.

The subject of fuel consumption has been hotly debated as the marginally higher fuel use will mean longer and more fuel stops, as well as smaller pit windows for the Nissan and Mercedes cars in direct comparison to their Holden and Ford counterparts.

The Winton 360 provides an ideal opportunity to trial the fuel blend and produce a thorough analysis before the PIRTEK Enduro Cup, as it does not include fuel stops.

The V8 Supercar Commission and all V8 Supercar team owners have agreed to the trial at the Winton Motor Raceway circuit.

“It is the responsibility of the sport to maintain the level of parity as stated in the technical regulations,” said V8 Supercars’ general manager of motorsport, Damien White.

“This will not enhance power or performance; it’s a possible means to ensure these teams are not disadvantaged leading into a critical time in the Championship.”

The V8 Supercar technical team, V8 Supercar Commission and respective teams will monitor its usage and a decision on its use in the endurance races will be made following the Winton 360.