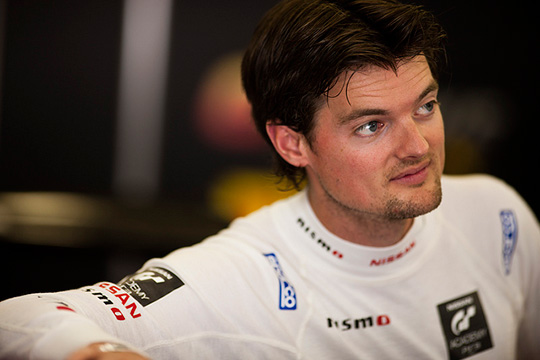 Both Bumcombe and Gavin are in Australia having made their Bathurst 12 Hour debut last weekend.

For Nismo Athlete Alex Buncombe this will be his first taste of a V8 Supercar when he tests the factory Nissan Altima V8 Supercar as part of the Nismo Global Driver Exchange program – a initiative sharing driver experience from different race categories around the world.

Buncombe, who was part of a four-driver team competing under the ‘Nismo Athlete Global Team’ banner at the Bathurst 12 Hour last weekend, will take to the wheel of Todd Kelly’s #7 Jack Daniel’s Nissan Altima at the V8 Supercars pre-season official test day.

“I couldn’t believe it when I got the call to say I was going to have a test in the car, and what a fantastic opportunity it is,” said Buncombe.

“I have never been to the circuit or driven the car, so it will be a big learning process for me. I do drive some historic cars back in Europe, so I’m used to cars with lots of power but not much grip.

“I know the Nissan Altima has fantastic power – similar to the Nissan GT-R we drove at Bathurst – but less driver aids, so I’ll have to get used to that. The sliding around part is something I’m really looking forward to.

“I really want to do a solid job for the team. They have an important day ahead of them with the first test of the year, so I really appreciate the time in the car.”

Rick Kelly’s place in the Nissan GT-R Nismo GT3 alongside Buncombe at last week’s Bathurst 12 Hour was the fourth time the Nissan Motorsport V8 team has been involved in the exchange. Spanish driver Lucas Ordonez and his LMP2 partner, German Michael Krumm tested the Altima at Winton in July last year, while Norton Hornets driver James Moffat claimed a podium finish in a successful international sportscar debut at the Dubai 24 Hours.

Buncombe was among the fastest drivers in the build up to the Bathurst 12 Hour, despite it being his first visit to the Mt. Panorama circuit, but a crash at the top of the mountain ruled the GT-R out after three hours of racing before Buncombe was able to feature in the race.

The 32-year-old Brit is regarded as one of Nismo’s ‘go-to’ men in European GT sportscar racing and is an integral part of the Nissan family, having been used as the professional driver and team-mate to graduates from the Nissan GT Academy.

“While some of Nissan’s global drivers were here for the Bathurst 12 Hour, it made sense for Alex to stay over for another week and go for a burn in a Nissan Altima V8 Supercar,” said Todd Kelly.

“Our Nissan team has already been a part of the global driver exchange program, and this is just another example of this. Any opportunity we have for them to test other drivers in the Nissan family is extremely valuable for the future.

“Rick drove with Alex in the GT-R at Bathurst and Rick was very complimentary of all the drivers. They’re all top level with plenty of experience, so hopefully Alex can get a good feel for our cars and we can learn stuff from him at the test.”

Gavin has recently been linked to the co-driver role alongside Nick Percat in the Supercheap Auto Racing entry for the PIRTEK Enduro Cup.

The 41-year old has previous V8 Supercar experience having competed in the Armor All Gold Coast 600 in 2011 landing two top six results for the Kelly Racing Pepsi Max, and has been looking for the opportunity to return ever since.

“I came here to get some experience and we will see how it goes from there,” Gavin told SpeedCafe.com.

“If there is an opportunity there I’d like to get the chance. We will see what happens in the future.”