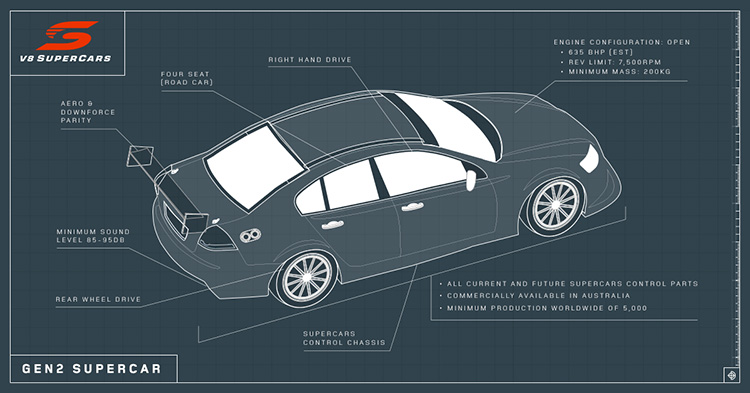 V8 Supercars has released the new draft of Gen2 regulations set for implementation from January 1 2017.

The guidelines detail further the Gen2 program first revealed in December 2014, which will open up the series to two-door coupes and non-V8 engines.

Led by V8 Supercars Sporting and Technical Director David Stuart, with extensive input from Steve Hallam, Ross Stone, Derek Crabb, Craig Hasted, Gen2 represents the next phase of growth for the sport and has been designed to be more relevant to manufacturers, race teams, sponsors and fans while still delivering on the current highly competitive series.

The Gen2 program provides flexibility for teams to compete with a different body style or engine capacity if, and when they choose, however any new engine or body shape will have to meet existing engine power outputs, aerodynamic guidelines and technical specifications. For the foreseeable future it is expected that teams will remain in their current configuration rather than make an immediate shift.

“The far more complex Car of the Future program was the first step in opening the garage door and as a result we now have Nissan, Erebus and Volvo as a very important part of our sport,” said V8 Supercars CEO James Warburton.

“Gen2 is another option for manufacturers and race teams should they choose, at a time that suits them, if at all. It is not a new direction or wholesale change”.

While Gen2 provides more flexibility in terms of body shape, the V8 engine is expected to continue as the dominant power plant of the sport.

“We made it clear when we announced the Gen2 strategy that there will be no compromise in power, competition or technical parity,” Warburton said.

“The category in 2017 will be exactly what it is now. Fast, loud and fiercely competitive. This opens the same garage door a little wider and future proofs the sport.

“As has been the case with Nissan, Volvo and Mercedes we have proven beyond doubt these core ingredients can be transferred from one make to another.”

The base guidelines to make a car eligible for competition under Gen2 guidelines are:

The race car version must be:

Most significantly, the Manufacturer Homologation Guidelines mandate a maximum accumulated engine power output and weighted average which will remain at the same range it is today.

“From our many discussions it is crystal clear manufacturers want to go racing with their DNA embedded on the inside and outside of the car they choose to race,” Warburton said.

“They want to use their engine technology and body aesthetics.

“These regulations allow for that over time without forgoing the promise of fast, fearsome and loud touring cars.”

The regulations are expected to be finalised by the last quarter of 2015.