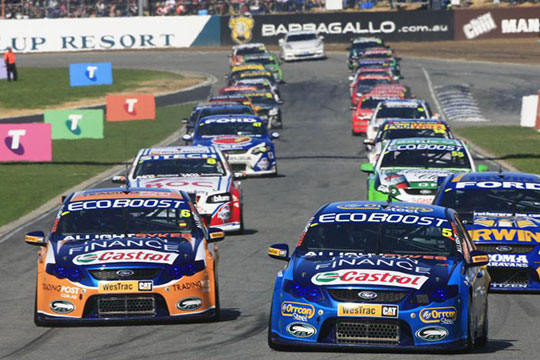 Described as “the most significant changes in the history of the sport”, V8 Supercars has announced a major shake up to its race formats for the 2013 Championship season.

The headline changes, which coincide with the debut of the Car of the Future and the addition of Nissan and AMG Mercedes-Benz, are the introduction of a ‘60/60 Super Sprint’ format and double-file rolling restarts.

Designed to add a ‘pure racing’ element to the sport, the ’60/60′ concept does away with refuelling and tyre changes in favour of four sprint races across the weekend.

A regular qualifying session will determine the starting grid for the first 60km half, with the results of the first half setting the running order for the second sprint. A top-ten shootout will also feature in the Darwin race. Championship points and podium results will only be awarded to the final finishing positions at the end of the second 60km half.

Another exciting change is the introduction of a double-file rolling start in the second leg of the ’60/60 Super Sprint’ races and double-file formation Safety Car restarts ¹. Already common practice in NASCAR and IndyCar, the lead drivers must only accelerate in a designated zone past the start-finish line ².

A pair of 15-minute qualifying sessions will set the grid for Sunday’s 120-km races.

Six rounds will feature the 60/60 Super Sprint format – the Tasmania 360 in April, the Perth 360 in May, the SKYCITY Darwin Triple Crown in June, the Coates Hire Ipswich 360 in July, the Winton 360 in July and the Phillip Island 360 in November.

“These are the most significant changes we have made to our formats in the history of the sport,” V8 Supercar COO Shane Howard said.

“With the new marques joining Ford and Holden in 2013 it was an opportunity for a change across the board while continuing the great traditions of our signature events.

“These changes are purely designed for the teams and drivers to race hard and have a real go.”

Three sprint rounds – the Clipsal 500 Adelaide, the Sucrogen Townsville 400 and the Sydney 500 will retain their race formats and tyre compounds. These three events along with the Sandown 500, the Supercheap Bathurst 1000 and the Armor All Gold Coast 600 endurance races will also be the only ones to feature refuelling during races.

The final formats for the ITM400 Auckland and the Circuit of The Americas event in Texas and the Abu Dhabi event next November ³ will be finalised in the New Year.

The V8 Supercar Commission has also changed the tyre compound rules for each event to assure that they are suited to the most exciting race at each individual venue.

¹ UPDATE: Feb 2013 – After a late rethink of the new regulations, V8 Supercars officials decided against the new double-file restart procedure deeming it unsafe.

² UPDATE: Apr 2013 – V8 Supercars officials amended the 60/60 Super Sprint format, introducing a NASCAR style ‘lucky dog’ rule to allow any drivers one lap down after the first 60km half to rejoin on the lead lap in the second half.