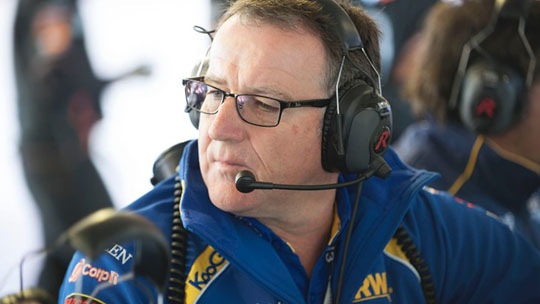 V8 Supercars has announced the appointment of David Stuart to the newly created role of Sporting and Technical Director.

Stuart, current team and engineering manager of the Erebus Motorsport team and its forerunner Stone Brothers Racing for the past seven years will take up the newly created role in July.

Stuart’s involvement with the introduction of Mercedes-Benz into the sport along with his years of engineering and management experience in the category were seen as valuable to the role.

Stuart will be responsible for ensuring parity between the vehicles contesting the championship as well as overseeing the homologation process for new manufacturers and cars.

While maintaining responsibility for the motorsport department, this will allow White to work more closely with chief operating officer Shane Howard in the delivery of the sport and the management of the sanctioned events.

Stuart and White are now tasked with developing a strategy for the technical direction of both the V8 Supercars and the Development Series.

“David has an exceptionally high level of technical, engineering, sporting and management skills that directly translate to this role,” said White.

“Critically, he has performed a lead role in the introduction to V8 Supercars of a new brand through Erebus Motorsport which gives him an in-depth understanding of the complexities of the new generation race car.

“As an engineer and team manager David has an acute understanding of the sporting and technical regulations along with an engineering knowledge to successfully act as the conduit between the teams and V8 Supercars.

“David has enormous respect within the sport which will make him a terrific addition to the existing team which has maintained V8 Supercars as one of the most successful in global motorsport.”

Stuart leaves Erebus Motorsport on good terms following a good run of top ten finishes the team’s first race victory earlier this year and believes the time is right for a new challenge in his career.

”It’s an exciting time to be joining V8 Supercars with the new TV deal coming online next year and it’s an opportunity to further expand my own skills and career in a new position,’’ said Stuart.

“It’s very difficult to move on from a team like Erebus, I’ve been here for a long time and have had a long history with everyone that works here. But this is a great opportunity for me to develop further professionally and personally and it will also be a good chance for people within Erebus to challenge themselves further.

“The last seven years with Erebus and Stone Brothers Racing have been fantastic and I’ll look back on my time here as the fondest period of my motorsport career.

“Having the opportunity to work with two motorsport icons like Ross and Jimmy (Stone) and a fantastic crew has been amazing, and then when Erebus wanted to be involved in V8 Supercars and bring Mercedes-Benz into it, to be involved in that project has been absolutely phenomenal.

“I’d like to thank Ross and Jimmy for giving me the original opportunity and also to Betty (Klimenko) and Ryan (Maddison) when we became Erebus, I can’t thank them enough for allowing me the privilege of being team manager at such a great team.

“It’s been great to witness the progress the entire Erebus team has made over the past 18 months and I’ve got no doubt there will be even better results to come in the future.”

The next round of the championship at Hidden Valley will be Stuart’s last before he starts his new role on 1 July.