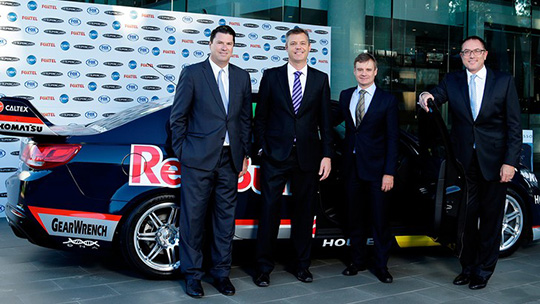 V8 Supercars today announced a six-year media deal with Foxtel, Fox Sports and Ten Network for all media rights including digital from 2015 to 2020.

Ten will take over the television broadcast rights after the current two-year deal expires in January 2015.

The deal is worth Aus$241 million, $196 million of which will be cash and the remaining $45 million advertising.

It is the biggest deal ever inked for the sport and represents a significant increase on all previous deals.

The new contract comes less than a year after former V8 Supercars CEO David Malone signed its 2013-2014 deal with Seven, said to be worth just $18 million per year.

“This is a tremendous and significant deal for our sport,” said V8 Supercars CEO, James Warburton.

“It is a great boost to our amazing race teams and fans and will lead to unprecedented coverage on multiple platforms for our sport, never before seen on such a scale.”

“I would also like to thank Seven and their commitment to the sport since 2007 and of course their continued support for 2014, the final year of our partnership.”

Foxtel CEO and Managing Director, Richard Freudenstein, said: “Foxtel is delighted to partner with V8 Supercars, Australia’s pre-eminent motorsport series. This relationship will significantly strengthen our sports offering and give yet another reason to subscribe to Foxtel.”

“We will be there for the fans and we will make no compromises in delivering them the finest coverage.”

Ten Network Chief Executive Officer and Managing Director, Hamish McLennan, said: “We are delighted to welcome V8 Supercars back home to Ten in 2015.”

“V8 Supercars is an iconic Australian sport, reaching into every part of the country, and James Warburton and his team have big plans to make it even stronger and better.