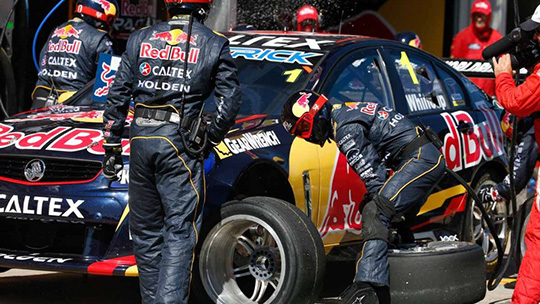 The V8 Supercars Commission has reviewed its penalty system and provided changes that take effect as of the next round in Perth.

The changes have been made in light of a number of controversial decisions in 2014, notably the series of pit lane speeding penalties handed out during the Sunday race of the Winton 400.

In an official statement the Commission said it considered each penalty with a view to “ensuring the punishment fits the crime.”

A significant change is the removal of the word ‘minimum’ from the penalty table meaning any infringement can now be judged circumstantially rather than to pre-determined guidelines.

“We have now given a clear mandate to our own Investigating Officer and Driving Standards Observer (Jason Bargwanna), and to the CAMS Stewards that any penalty should be comparable with the offence,” said V8 Supercars general manager of motorsport Damien White.

“That means the extent to which a rule is breached may be considered in determining an adjustment (up or down) of the recommended penalties.”

The Commission also confirmed that under the new penalty system pit lane speeding offences below 43 km/h between fixed timing loops at the start of pit lane will be investigated post-race as opposed to the current system which awards an automatic pit lane penalty during a race. Any speed registered above 40km/h however will still result in an automatic pit-lane penalty.

The Commission has also acknowledged the need to recognise pitlane rule breaches that deliver a performance advantage and those that are a safety risk.

“A performance advantage can result in a driver or point’s penalty while a safety breach can result in a team penalty such as a fine, points or exclusion,” read the statement.

“An example of these are a car controller assisting with minor work on the car and not paying attention to the safety of his crew. This may be determined a safety breach.

“A car controller who assists by working directly on the car during a pit stop may be deemed a performance and safety breach.”

White explained: “Exceptions to any variation, and this is where the pit lane speeding item was heavily discussed, may include rules which are in place for safety and/or are performance related

“Safety is potentially compromised by speeding in pitlane, and most certainly is a performance advantage, no matter how small.

“That said, we don’t want the fan experience ruined, hence we have introduced the provision for a post-race review on speeding breaches at pit entry that sit at the lower end.”

V8 Supercars has publicly released its full table of recommended penalties which will take effect from the next V8 Supercars event, the Perth 400.

“We saw no reason why these penalties should not be made available and this has been clearly communicated with our teams,” White said.

“Making the document available to teams and fans alike obviously provides a greater level of transparency. Taking away that element of surprise, particularly for our passionate fans, will provide for a greater acceptance and, for the teams, stability in the process of applying the rules.”