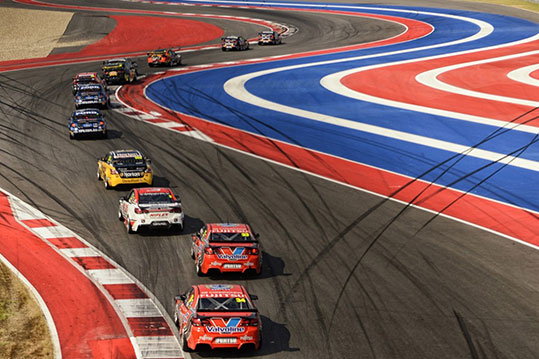 V8 Supercars has announced several more amendments to its 2014 rulebook, with changes to tyre use and practice and a revised Safety Car restart procedure among the key changes.

After complaints that the 2013 tyre allocation has been too tight this season, leading teams to save ‘green’ tyres for race days, rather than using them in practice, all teams will be required to submit one set of tyres to supplier Dunlop after practice is complete – used or not. Those tyres will then be placed in the team’s tyre bank, to be used either as pre-marked tyres for practice at future events or for test days. This will ensure teams do more green tyre running during practice.

“With the new ruling, effectively, if you run greens in the last few minutes of a Friday session, you’ve got a great set to add to the bank and/or use as pre-marked tyres at the next race meetings.

“And remembering at the next event you can use a set of greens from that allocation as well, the tyre bank builds up – in terms of practice, eventually every set of tyres will be good.”

From 2014, all Safety Car restarts will incorporate an Acceleration Zone similar to that seen in this year’s double-file Super Sprint restarts. However, rather than cars accelerating when the Safety Car returns to pit lane, the Safety Car will control the field, then before pulling away it will slow to 60km/h. The field will remain in a single file and the lead car cannot accelerate until it has reached the acceleration zone, which will be on the approach to the start/finish line.

The new system has been introduced to prevent a repeat of the third race of the Austin 400, where the top three finishers were penalised post-race after accelerating too soon, and to reduce the hike in Safety Car restart investigations seen this season.

“There has been a huge amount of controversy around the lead car accelerating too early. This way, drivers won’t have to wait for the call from their team over the radio. It’s obvious when they’re in the acceleration zone,” continued White.

“The additional benefit is it much easier for official to judge a breach.

“Finally, the suspense of seeing 28 cars rumbling towards the line at 60km/h is brilliant.”

With the exception of the PIRTEK Enduro Cup events, from 2014 all teams will be required to put in a specified amount of fuel during their refuelling stops in Sunday’s Super Sprint races. Introduced at this year’s ARMOR ALL Gold Coast 600, the regulation aims to address fuel consumption differences between manufacturers seen this season.

Additional rule changes for 2014 include the introduction of extra driver practice sessions at Winton, Queensland Raceway and Sydney Motorsport Park, with the first session (P1) extended to a 75-minute session. Furthermore, all practice sessions at every round of the Championship will be time certain.

There will also be a 15-minute time extension for qualifying to be shared between two sessions, when run on the same day.

In addition, the Car of the Future (COTF) will also now officially be known as the ‘New Generation’ (NG) V8 Supercar.