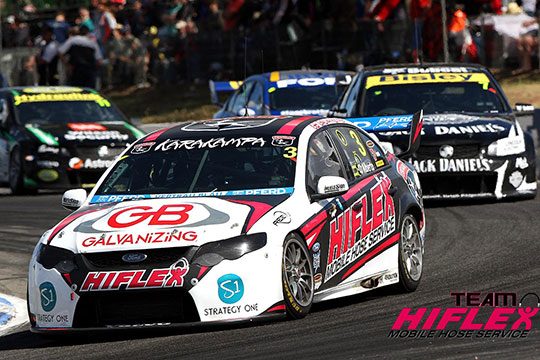 Tony D’Alberto is determined to ‘right the wrongs’ that put him out of contention in last year’s Sydney Telstra 500 in the final event of the V8 Supercars Championship at Sydney Olympic Park this weekend.

The Victorian qualified in the top half of the field in both races last year and was on track for a top 10 finishes – at worst – only to suffer from cruel luck in the two gruelling 250km races.

After qualifying 12th for Saturday’s race, a bent steering arm in the opening stages of the race put paid to any chance of a top line result.

On Sunday, D’Alberto qualified ninth, took a gamble on slick tyres at the start of the race and led the field for a number of laps before enduring a major accident, caused by debris on his tyres. The sickening impact into the notorious Sydney concrete has been used regularly by V8 Supercars Television during promotions for the event.

The Homebush event also marks the final V8 Supercars races under the current technical regulations before the ‘Car of the Future’ is introduced full-time into the sport.

After a top 10 finish in the last event at Winton two weeks ago, D’Alberto is looking to turn around his promising 2011 form and turn it into a grand result in the final event of the 2012 season.

And if form is any indication of D’Alberto’s intentions, he heads to Sydney having scored a podium finish in the last race of the V8SuperTourers Series in New Zealand at Ruapuna last weekend.

“Last time I was sitting in a race car at Homebush, someone had to help me out of the car. It was a big hit, but at least I’ve made the highlights reel for the past 12 months!” said Tony D’Alberto.

“This year, I want to finish what we had going on there last year.

“Everyone wants to do well in the final round. The championship is already won, we don’t have that to worry about, so we can go nuts.

“Like everybody, it’s our last race in these cars before we start fresh with Car of the Future next year. There would be no better way to end this era than with a strong result.”

“After a long season, our whole team deserves a well earned break, but we’re all hungry for one more great result this weekend,” said Al D’Alberto.

“Sydney was looking good for us last year, but it didn’t work in our favour.

“After a top 10 finish at Winton, we want to replicate that form and end the season on a high.”