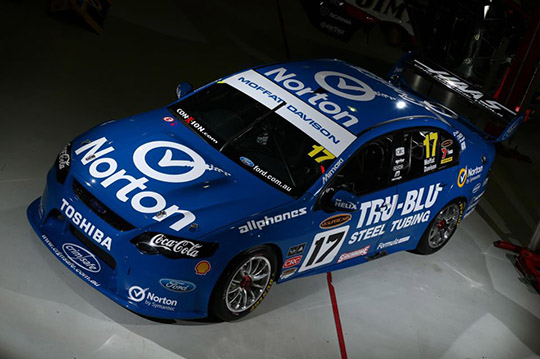 The Bathurst-only livery, revealed today at DJR’s Headquarters in Queensland, marks the first time the team have reverted back to the popular livery made famous by Dick Johnson’s fabled incident with ‘The Rock’ in 1980.

The design on the Team Norton DJR Falcon, which will be driven at Bathurst by James Moffat and Alex Davison, pays homage to Dick’s legendary Tru-Blu XD Falcon. Dick won the Bathurst 1000 in 1981 with John French, on his return to the Mountain following the 1980 incident with this livery.

The win was a way for Dick to repay all the fans who had donated money to the team and supported him during the tough times.

Dick Johnson, Owner and Team Principal, Dick Johnson Racing,“I am so thrilled that sponsor Norton want to run my Tru-Blu livery on James and Alex’s Team Norton DJR Falcon at the 2012 Bathurst 1000. The win in 1981 was an emotional one for me and the team and has never been forgotten by motor racing fans around the world since.

“The car is definitely going to get fans around the world excited, and Norton has done a great job incorporating the historic with the new. I can’t wait to get there and see it racing!” Dick concluded.

“As we get set to mark the 50th anniversary of the Bathurst endurance race, Norton is excited to contribute to the celebrations by honouring an iconic livery in Australian motorsport history, bringing back to life Dick Johnson’s Tru-Blu livery on the modern day Team Norton DJR car. We are proud to be a sponsor of V8 Supercars and delighted to be able to share this commemorative livery with motorsport fans,” said Trudie Wood, Senior Marketing Manager, Consumer Business Unit, Symantec Corporation.

The Team Norton DJR Falcon will also run Dick’s iconic #17 instead of the #18 it has run throughout the rest of the year, with DJR team mates, Steve Johnson and Allan Simonsen running #18.