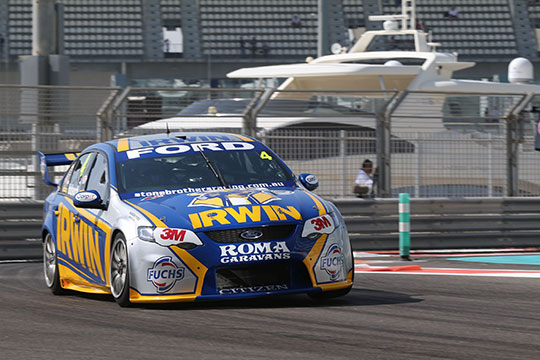 Lee Holdsworth has scored a top-5 finish in the opening race of the Abu Dhabi round of the V8 Supercars.

Starting from fifth and despite some early pressure from the likes of Garth Tander and Craig Lowndes, the IRWIN Racing driver settled into a groove over the 12-lap journey to finish fifth. It was Holdsworth’s best result since finishing fifth at Phillip Island in May.

The second 12-lap race of the day at Yas Marina was run on the softer Dunlop race tyres and Holdsworth once again got a solid start. However, on the second lap the IRWIN Ford dropped two spots to Mark Winterbottom and Tander. Then on Lap #5 Holdsworth ended-up facing the wrong way after locking the rear brakes and getting a tap from David Reynolds. From that point Holdsworth got back into his stride and had good pace to complete the race in a eighth position.

On Sunday Holdsworth will take part in the final 12-lap race of the meeting and will be aiming to move up from his ninth place on the grid.

“I was really happy with the first race and to finish top five again. It’s good to be back up there but this track is not really one that promotes racing.”

“We got off to an ok start in the second race, I didn’t gain any positions but I didn’t lose any. Obviously Winterbottom was pressing on pretty hard and I couldn’t hold him or Tander off. So I slotted into sixth there and thought we were going ok, but I had problems with locking rears in the race.”

“We ran a bit long through turn eight and as I turned the corner I got a hit from behind from Reynolds which turned me around. That dropped us back a couple of positions and we were actually lucky to stay where we were because I did a full spin. I finished eighth which was a good recovery but it was a little bit disappointing.”

“We had a good car for race one but not as good for race two so I think some of the changes we made we’ll go back on them. Hopefully we’ll have a good car for tomorrow; we’ll start in ninth and hopefully make our way back up.”