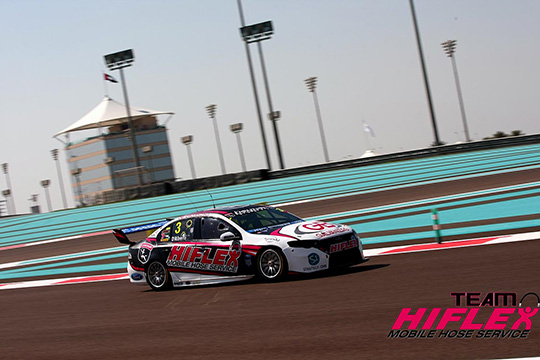 Tony D’Alberto has rued a lack of outright race pace after a consistent weekend of results at the Yas Marina Circuit in Abu Dhabi.

D’Alberto’s weekend got off to an encouraging start, finishing second in the second practice session.

Unfortunately, the team could not transform the practice pace into qualifying speed, with D’Alberto securing 18th, 16th and 16th grid starting spots for the weekend’s three races.

The first race was action packed. D’Alberto was involved in mild contact with James Courtney, which propelled him into a touch with Alexandre Premat. D’Alberto raced on to take a promising 14th, despite being delayed in the mess.

After the race, the stewards penalised D’Alberto for the incidents, deducting 37 points from his championship tally.

In Race 2, a sluggish first lap dropped the Team HIFLEX Falcon as lows as 22nd before D’Alberto drove it up to a 19th place finish.

D’Alberto ran in 16th place for the majority of the last 12-lap race but was passed by Russell Ingall on the final lap. ‘TD’ finished the weekend’s final race in 17th place.

D’Alberto was lucky to avoid the a major incident during the race, narrowly avoiding Jason Bright’s stricken Commodore.

The next event of the V8 Supercars Championship will be held at Winton Motor Raceway – TDR’s home track – on November 16-18.

“We had a consistent weekend, but we didn’t quite have enough pace to move forward much more than where we were,” said Tony D’Alberto.

“I was extremely lucky to have missed Bright’s spinning car in the last race. I was asking for some luck before the race. I didn’t get any in the races, but for me to have missed his car, I reckon my luck has changed after that one!

“It certainly wasn’t the results that we really wanted, but we’re all really looking forward to Winton now.”