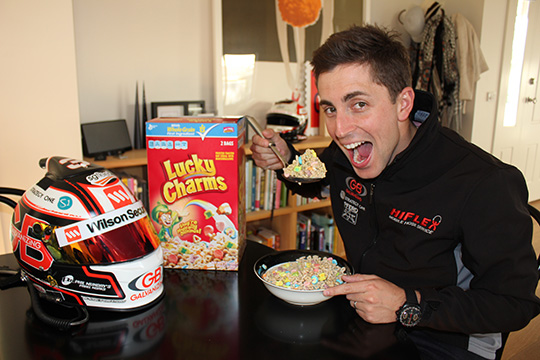 Tony D’Alberto is looking for a change of fortune and has called upon a unique breakfast diet to turn around a recent run of bad luck.

The #3 Team HIFLEX Ford driver has pledged to eat ‘Lucky Charms’ breakfast cereal each day in the lead up to this weekend’s V8 Supercars event at Abu Dhabi in the hope of giving him some much-needed fortune.

In the past three V8 Supercars events, D’Alberto has been eliminated from each event – through no fault of his own.

At the Sandown 500 in September, the #3 HIFLEX-backed Ford qualified 13th but was on the end of a nose-to-tail accident in the opening laps of the race, putting him in the sand trap and out of contention.

At the famous Bathurst 1000 event, D’Alberto was innocently clipped by Russell Ingall in the later stages of the 161-lap race while in a position to score a top 10 finish.

And in the most recent event at Surfers Paradise, D’Alberto qualified an impressive eighth, only to watch his international team-mate Vitantonio Liuzzi involved in the multi-car wreck on the front straight. The incident saw the pair take no further part in the event and left the small team with the huge task of repairing the damaged Ford.

The Victorian team worked day and night to ensure the car was fit to be shipped to Abu Dhabi, and D’Alberto is keen to repay his dedicated team’s hard work with strong results – and to do that, he’s pulling out all stops, including changing his breakfast diet!

TONY D’ALBERTO (team driver)
“It has been a character building period for myself and the team. Frustrating is a word that springs to mind, so it has required a lot of patience to get through it,” said Tony D’Alberto.

“I’ll basically do anything to get some luck. I’m not a very superstitious guy. I don’t have any lucky jocks to pull out of the draw, so I’ve decided to tuck into some Lucky Charms cereal. If oats and marshmallows for breakfast can’t do the trick, nothing will!

“We’ve had a tough run of late, but it’s time we changed that.

“I’ve been frustrated, but so has the team. They are racers as well, and it has been equally disappointing for all of us. They’ve done a massive amount of work to get the car ready in time to fly over to Abu Dhabi. It goes to show how much determination the team has to make the car go well.

“I’m looking forward to Abu Dhabi, and I’m really keen to get a strong run of results. I guess we’ll find out just how ‘lucky’ my new diet will be!”

AL D’ALBERTO (team owner)
“As a whole, Team HIFLEX has put in a huge amount of effort to get the car ready for Abu Dhabi,” said Al D’Alberto.

“I’m not sure if Tony’s breakfast choice is what it will take, but I know that Tony and team really deserve a lucky break.

“We’ve shown very good speed in the past few months but haven’t got a reward for that. We’re all hoping that Abu Dhabi will end that bad run of fortune.”