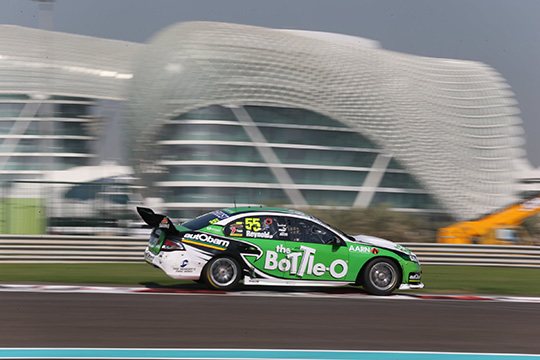 Ford Performance Racing’s Will Davison has finished the Abu Dhabi V8 Supercars event with a hat-trick of second places following his third-straight such result at Yas Marina. Davison was forced to fight harder for his position than the previous two races when he made contact with Jamie Whincup on the run to turn one. The impact dropped him to third behind Tim Slade and it wasn’t until three laps from home that he made it back to second by which time it was too late to catch his chief rival.

Mark Winterbottom used his further improved pace to claim fifth after two clinical passing moves gained him two places above his grid slot. He closed in on fourth by the end of the race but was delayed in doing so after a lengthy safety car dropped his tyre pressures.

David Reynolds was lucky to avoid the safety car incident which saw Karl Reindler’s car catch on fire, though that was all the luck he had in finishing 12th. He was forced wide on the opening laps of the race and dropped as low as 13th before gaining a place after the restart.

DRIVERS’ VIEW
Mark Winterbottom – #5 Orrcon Steel FPR Ford
Race Result: 5th – Fastest lap: 2m14.08s
“The car was much better in the final race and though it still wasn’t right, if I’d had it like that in practice we could’ve tuned it into a fast race car. We made progress all weekend and it makes me more confident knowing we had a car that was good enough to be at the front of the field. The format wasn’t the best and to have a safety car and eventually a five-lap race makes it hard when it’s a championship race. But, it was the same for everyone and finishing fifth and passing a couple of cars was about all I could do.”

Will Davison – #6 Tradingpost FPR Ford
Race Result: 2nd – Fastest lap: 2m13.62s
“I didn’t have the best of starts and I tried something a bit different but it didn’t quite work out and the contact with Jamie (Whincup) didn’t help. Tim (Slade) got me and that meant I couldn’t attack Jamie when I had the car to do so. It wasn’t quite as good as yesterday and while I was much faster once I got into second it was too late to do anything. Three second places aren’t anything to complain about but we expected more after our qualifying form.”

David Reynolds – #55 The Bottle-O FPR Ford
Race Result: 12th – Fastest lap: 2m14.67s
“I was struggling with tyre temperatures or pressures at the start as something wasn’t quite right and I also had a little touch with (Garth) Tander which didn’t help things. We made the car better today but by the time I got going I was six or seven places lower than I should’ve been and when you get caught up in the mid-field you increase your chances of having an incident.”

Tim Edwards – FPR Team Principal
“Today’s race was our best overall for the weekend but finishing second again certainly wasn’t what we hoped for. Will recovered well from his start line incident and Mark used all his experience to gain a couple of places. With three poles we expected more though we now head to our home track at Winton and to a more familiar race format where we are sure of resuming normal service.”