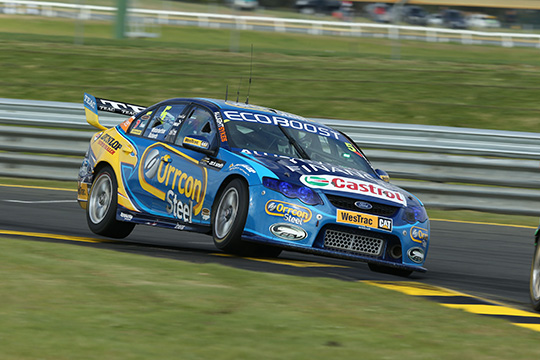 Ford Performance Racing believes its all-star line-up of international co-drivers will give it three genuine chances of repeating last year’s win on the Gold Coast when Indycar ace Will Power and ex-Formula 1 stars Mika Salo and Nick Heidfeld join the factory Ford team for Surfers Paradise.

Bathurst star David Reynolds will pair with the event’s headline act in Heidfeld and the combination is sure to create a lot of hype on and off the track.

Winterbottom was unlucky at Bathurst but with the title fight still in play he and Gold Coast-expert Power will be chasing maximum points.

Power’s childhood rival Will Davison will again pair with Salo and both want to go one better than the second place they secured in last year’s race.

DRIVERS’ VIEW
Mark Winterbottom – #5 Orrcon Steel FPR Ford:
“The Gold Coast it is definitely one of my favourite events. It seems to be a good track for me and is arguably the place where I’ve had the most success so I enjoy going back there. I’m also looking forward to racing with Will as I missed out last year. He is a good bloke and it should be fun racing with him. I know he really wants to win at Surfers Paradise so it would be special if we can. I need to win to help the championship and if we can we put more pressure and will close the gap. We will be aggressive and try our best as we can do no more.”

Will Power – #5 Orrcon Steel FPR Ford:
“I’m looking forward to getting back to the Gold Coast as it is like my home race. Last time I raced there in a V8 Supercar was 2010 and while we didn’t have the best result we had a lot of potential. I am really looking forward to driving with Frosty and he is right there in the title hunt so I will be doing everything I can to help him out.”


Will Davison – #6 Tradingpost FPR Ford:
“It is great to get back on the horse after a devastating Bathurst. With the form we showed my motivation is to get back in the car and get the result we deserved. There are a lot of goals I want to achieve and as the title is probably out of the equation it is just about winning races. There is no pressure for the championship so I can enjoy myself and try and enjoy races. It is also great to have Mika back. He’s cool and he wants to go one place better than our second place last year so I am looking forward to having a fun weekend.”

Mika Salo – #6 Tradingpost FPR Ford:
“I am looking forward to getting to the Gold Coast this year and seeing how much the FPR cars have progressed since I last drove there. Will has not had a lot of luck lately despite being really quick so we want to change that. The obvious car speed that he has will help us try and get that win we missed out on last year and it will be great to team up with him again as we had a lot of fun last time. I think with Will Power and Nick Heidfeld in our line-up we will be very strong as a team so I can’t wait to test the car again on Wednesday.”

David Reynolds – #55 The Bottle-O FPR Ford:
“This is probably one of my favourite races of the year because of the atmosphere. The track is also enjoyable to drive. Pairing up with Nick is cool. He’s a legend. Formula 1 drivers always have something special about them so it is going to be cool to learn how he talks about the car and uses his background and experience but also to teach him how to drive one of our cars. Current form isn’t too bad. We can take a lot of confidence from the last round and now try and win some races at the remaining events.”

Nick Heidfeld – #55 The Bottle-O FPR Ford:
“I am really excited about racing on the Gold Coast with Dave especially after seeing the amazing finish at Bathurst last week. I have been racing sports cars this year and know just how hard it is to win such a long race so to come so close after 1000km is very hard to accept but the quality of his drive means I am certainly paired with the right driver. I know the cars are unique but our test day on Wednesday is a great chance to get to know how they work and meet my new team. The Gold Coast race has always been popular around the world and I can’t wait to experience it myself for the first time.”

Tim Edwards – FPR Team Principal:
“The Gold Coast is an event we all enjoy for a number of reasons – the location, the weather, the track and also the great drivers we get to have in our cars. This year we have our best line-up ever and we welcome Will (Power) and Mika back for their second year driving with us. Nick is new to the team but having worked with him in Formula 1 and seeing how well he converted to sportscars at Le Mans this year I think he will fit in well. Surfers Paradise is a very tough track but we were quick there last year and our cars and the entire team are better 12 months on so we have high hopes of carrying on where we left off.”

CIRCUIT: Surfers Paradise
LENGTH: 2.984-kilometres
DESCRIPTION: The tightest street circuit on the calendar, this difficult circuit combines straight-line speed with the slowest and narrowest of corners, making panel rubbing and major accidents normal for the event. Having stated this, drivers enjoy having a real go at this circuit as the rewards are great for the effort, but the price to pay for a mistake, just like any street circuit, can be major.
TRACK RECORD: 1m10.96s – Jamie Whincup, 2011 (qualifying)
FPR BEST RESULT: 1st – Mark Winterbottom, 2009 & 2011