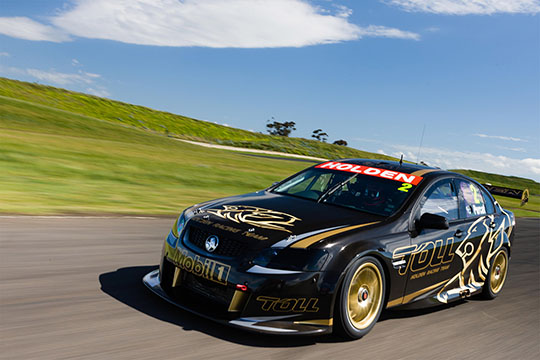 The stunning new Commodore, the result of almost 1,500man-hours by the Walkinshaw Racing organisation from design through to construction, underwent its initial shakedown at Calder Park Raceway today.

The gold theme introduced for the 2012 race season carries over and now incorporates the logos of long-time HRT major partners, Toll, Mobil 1 and HSV.

“It’s quite a day. This is the first time in seven years that we have designed and built an entirely new car and you can feel the emotion of the occasion throughout the organisation,” Hallam said.

With a record 200 all-time race wins, six Australian Touring Car/V8 Supercars Championships and seven Bathurst 1000 wins since its inception in 1990, HRT is the most successful Australian motor racing team.