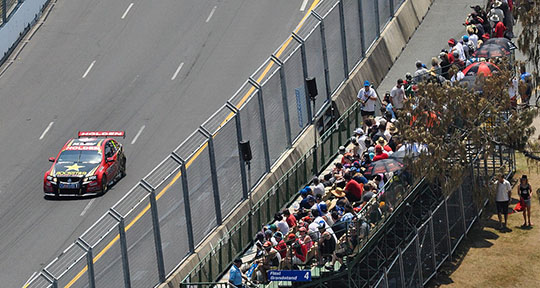 The Holden Racing Team’s Garth Tander and Ryan Briscoe have delivered another strong driving performance to finish today’s 300km race for the Armor All Gold Coast 600 in fifth place.

After Tander qualified 12th in this morning’s 30-minute run, Briscoe again started the race and drove well throughout the first half of today’s 102-lap battle to bring the #2 HRT Commodore up through the order.

Despite having been called into pit on lap 13 due to a Safety Car intervention, Briscoe stayed in the car right through to lap 58 when he handed over to Tander.

With Tander in control for the last half of the race, the 2007 V8 Supercar Champion pushed up into fourth on lap 73. While his HRT Commodore looked strong, it simply did not have the race pace to run with the lead three and Tander crossed the line fifth – today’s result delivering a pair of top 5 finishes for car #2 this weekend.

Determined to build on their strong Saturday result, teammates James Courtney and Darren Turner showed good speed and battled hard during the first half of today’s contest but unfortunately encountered a late puncture which pushed car #22 down the order into 17th by race end.

The V8 Supercars Championship continues at the Yas Marina circuit in Abu Dhabi from 2-4 November, 2012