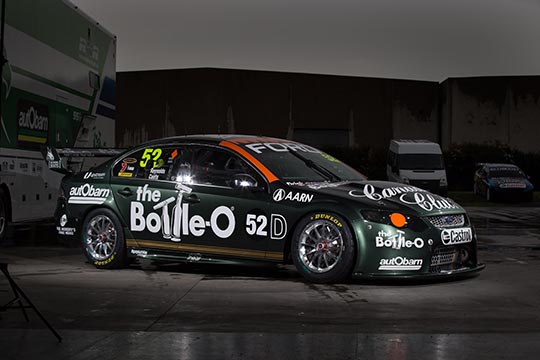 The Bottle-O Racing Team has gone to a remarkable level of effort to pay tribute to Ford’s first ever V8-powered triumph at Mount Panorama with the team painstakingly hand-painting a special livery for its entry in this year’s 50th anniversary edition of Bathurst.

Harry Firth and Fred Gibson’s 1967 Falcon GT race winner has been recreated 45 years after it became the first ever car with a V8 engine to win what is now the Bathurst 1000.

David Reynolds and co-driver Dean Canto will pilot the FPR-prepared Falcon which is also switching from its regular 55 race number to 52D – the number used by Firth and Gibson.

“I love the history of Bathurst and I think we’ve taken something very special from Ford’s past and done our best to stay as true as possible to the old ways,” Reynolds said.

“The detail the team has put in to get to this point is amazing. Hand-painting logos is unheard of in modern motorsport so I know we will really stand out.”

The livery also contains chrome finish around the windows, B-pillar and mirrors plus additional GT badging on the car as per the 1967 Falcon it pays homage to.

“The 50th anniversary of the greatest motor race in Australia was always going to be a special occasion so we felt paying respect to one of the more significant moments was a fitting thing for us to do,” Nash said.

“V8 engines have made our sport what it is today so the importance of the first ever car to win with this configuration of engine could not be overlooked. The team has done it justice and when you see the original car next to our current car the colour match is identical.

“Now I’ve seen the finished article I can see how effective such a straightforward design can be. I think every fan, irrespective of whether they are a blue or red supporter, will be impressed with what we’ve done.”

In 1967 the race-winning entry was also driven to and from the track and Reynolds will follow a similar path when he drives a replica of the distinctive green and orange liveried Falcon GT from Melbourne to Bathurst.

To cap off its tribute the team has also designed special retro garage walls and 60s-style outfits for its promotional staff.