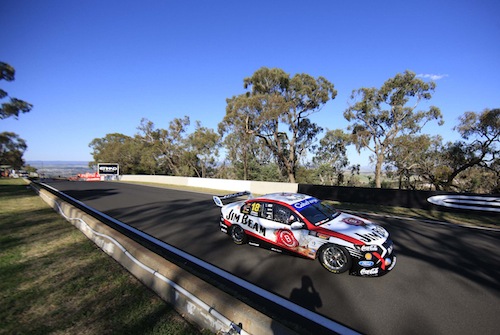 Unseasonably warm weather greeted the Dick Johnson Racing squad as they began their assault on the Mountain for the 50th year of the Bathurst race.

After two practice sessions this morning, where the team focused on car set up, the main series drivers headed out onto the 6.2 km track for the 40 minute qualifying session this afternoon.

The hero of the DJR team was Steve Owen, who placed his V.I.P. Petfoods Falcon in 9th position for Saturday’s Top 10 Shootout.  This was the same place that Owen started the shootout from in 2011, eventually beginning the 161 lap race in 6th.

James Moffat and his Team Norton DJR Falcon was the next best placed car of the quartet, qualifying for Sunday’s race in 17th position.

Jim Beam driver, Steve Johnson, was unable to successfully complete his best flying lap, coming home in 18th position, though his time of 2:08:6011 was nearly a second quicker than in 2011.

Team Norton DJR and the two Jim Beam Falcons will only head out for the final 50 minute practice session tomorrow morning, whereas the V.I.P. Petfoods crew will also have to prepare Owen’s car for the Top 10 Shootout, late in the afternoon.