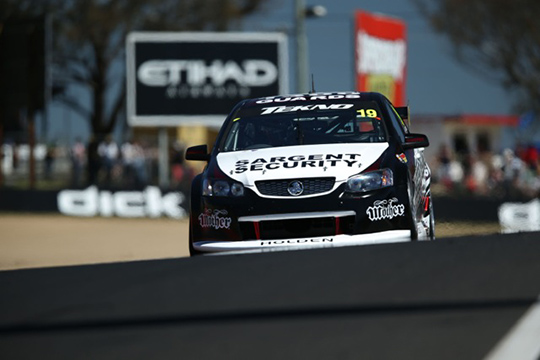 Coming off the back of a strong top 10 finish at last month’s Sandown 500, Tekno Autosports has lifted even further on the biggest day in Australian motorsport – race day of the Supercheap Auto Bathurst 1000.

The gruelling 1000km classic was bittersweet for the young squad, as the #91 Hawkins Transport Commodore of Jonny Reid and Michael Patrizi became the first retirement of the race after a driveline problem struck on lap 19 with Reid at the wheel. However, Jonathon Webb and Scott McLaughlin driving the #19 Sargent Security Holden ensured the 50th year of the event was one to remember for Tekno with an excellent sixth place.

Just as at Sandown, Car #19 was thoroughly competitive throughout the entire 161-lap race and rarely ran outside the top 10 all day. The result is Webb’s best finish of the season and a career best for the Sydney born driver at Mount Panorama, while McLaughlin finished the race as the highest placed rookie capping off a stunning maiden two ‘main game’ V8 Supercar starts for the 19-year old.

With Car #19 lining up 11th and Car #91 starting 25th for the big race, the team opted to pit Car #91 at the end of the warm-up lap in a low-risk strategic move to take on extra fuel. Despite slipping back two spots off the start, Webb settled into a good rhythm in Car #19 during his first stint and eventually progressed back to ninth before handing the car over to McLaughlin on lap 20.

McLaughlin’s stints were exemplary for a Bathurst rookie – the Gold Coast-based Kiwi ran as high as fourth and yet again held his own in the company of drivers with far more V8 Supercar and Bathurst experience.

Well-executed strategy and pit work, strong race pace and an incident-free run from both drivers left Webb in an excellent fifth for the all-important run to the finish, with only the fast-finishing TeamVodafone entry of Craig Lowndes challenging Car #19 to take fifth spot on lap 143.

Car #19’s sixth place finish now takes the team to 11 finishes inside the top 10 this year, and promotes Webb two spots from 18th to 16th in the championship.

Tekno Autosports will now shift its focus to the Armor All Gold Coast 600 from October 19-21, when the team will be joined by German sportscar star and Porsche factory driver Marc Lieb (driving Car #19) and 2010 Formula 1 driver Lucas di Grassi who will enjoy his first taste of V8 Supercars co-driving Car #91.

“A massive achievement for car 19, very proud. Amazing accomplishment to race a highly competitive 161 laps around the mountain. Jonathon and Scotty proved a great pairing in every critical department. On the other hand I’m extremely disappointed for car 91, mechanical failure meant an early departure for the race.”

“Another tough Bathurst weekend, so happy to leave the mountain with a strong result. A huge thanks to my co-driver Scotty McLaughlin, sensational effort for a young guy in his maiden 1000. The car was the best I’ve ever been equipped with for the great race- a testament to how far our team has come. Disappointing to have a race to the end based on fuel numbers, the Sargent Security car had more pace than we were able to show.”

“Heartbreaking to end the way we did. A great result for Jonathon and Scott in car 19. It was a positive weekend working with the team, and I’m sure we’ll be strong on the streets of the Gold Coast. Thanks again to Hawkins Transport for their support.”