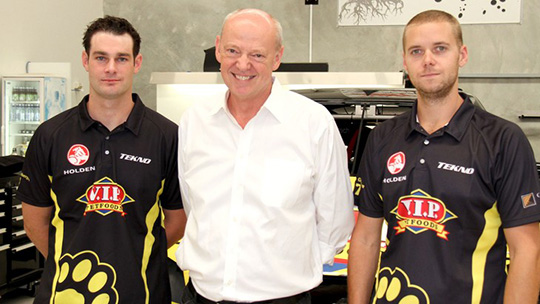 Tekno Autosports has confirmed Shane Van Gisbergen will remain at the team along with major sponsor, V.I.P. Petfoods, in a single-car operation.

Van Gisbergen who recently set a new Mt Panorama lap record behind the wheel of a McLaren MP4-12C at the Bathurst 12 Hour, is confident he can improve on his fifth place finish in the 2013 championship standings.

“I’m excited about the upcoming season and to again go racing with Team TEKNO V.I.P. Petfoods.

“I’m hoping to build upon our strong finish to the 2013 season and am optimistic that this can be my most competitive V8 campaign to date,” Van Gisbergen said.

Hallam replaces former manager Bruce Jenkins, and will oversee day-to-day running of the team, working in conjunction with technical partner, Triple Eight Race Engineering, along with managing the strategic and commercial direction of the operation.

“Steve has a wealth of international experience, and the way HRT improved under his direction showed his capabilities,” said Tekno Autosports managing director Jonathon Webb.

“Steve’s personality, professionalism and leadership skills ensure he will be a highly-valued member of our close-knit family team.”

A former F1 engineer and managing director of NASCAR Sprint Cup team Michael Waltrip Racing, Hallam believes Van Gisbergen is among the most skilful drivers he has observed during his time in Australia.

“Shane is one of the best on the grid, and if you look at some of his performances from last year, his raw talent is clear for all to see,” Hallam said.

“He’s completely committed to moving the team forward, and is someone who can strap a car onto his back and run with it if necessary.”

Hallam was also quick to praise the Tekno outfit for its use of Triple Eight equipment.

“I have a high opinion of Tekno’s capabilities as a team. They run Triple Eight components; but most impressive is the way they get the best from that equipment.

“I have immense respect for (Triple Eight’s) Roland Dane and Ludo Lacroix and I am very much looking forward to working closely with them.”

While Webb has stepped back from full-time driving duties this season with Tekno Autosports, he will join Van Gisbergen for the three PIRTEK Enduro Cup events at Sandown, Bathurst and the Gold Coast.

“The decision to step back from ‘full time competition’ for the upcoming season wasn’t something I took lightly, my passion is racing,” Webb said.

“We believe our approach to the 2014 Championship will allow Shane and Tekno the greatest chance at success.

“Shane and I are a similar height and build, so it’s very appropriate for me to partner him in the enduros.”