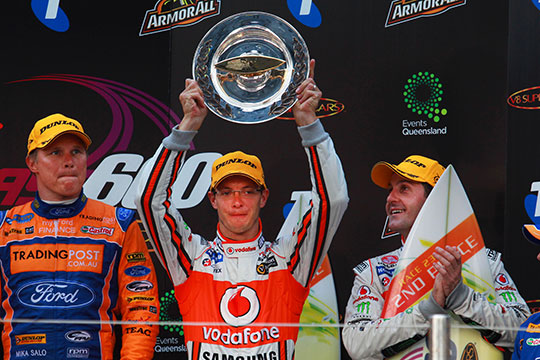 For the second year in succession, TeamVodafone co-driver Sebastien Bourdais has claimed the Dan Wheldon International trophy at the ARMOR ALL Gold Coast 600.

It was a case of Deja vu for Whincup, who once again secured pole position, topping the time-sheets in qualifying with a time of 1:11.1077.

Bourdais started the final Gold Coast race and held the lead off the line. The Frenchman maintained a solid gap until his pitstop on Lap 36 when he handed the #1 Commodore to Whincup.

The Gold Coast local led over 45% of the 102-lap race before a battle ensued with Davison on Lap 73, the Ford driver moving past Whincup on Lap 80.

Whincup kept the pressure on Davison throughout the remainder of the race but couldn’t find a way past.

After qualifying seventh Craig Lowndes and Richard Lyons made a valiant effort throughout today’s 300km race to finish sixth.

Lyons got a good start,  moving to fifth off the line. The Irishman drove consistently over the next 34 laps before handing the #888 Commodore to Lowndes. Not long into his stint, the TeamVodafone driver was thwarted by a clutch issue and he dropped back to seventh.

Lowndes moved past Russell Ingall following the fifth safety car period to sit sixth where he stayed until the race end.

Jamie Whincup has further extended his lead in the V8 Supercars Championship Series to sit 218 points ahead of Mark Winterbottom. Craig Lowndes has dropped to third and sits 27 points behind Winterbottom on 2815 points.

TeamVodafone will now prepare for the Yas Marina 400 in Abu Dhabi, the tight turn around will see the V8 Supercars race again in a fortnights time (November 2-4).

For regular news and updates, head to www.teamvodafone.com