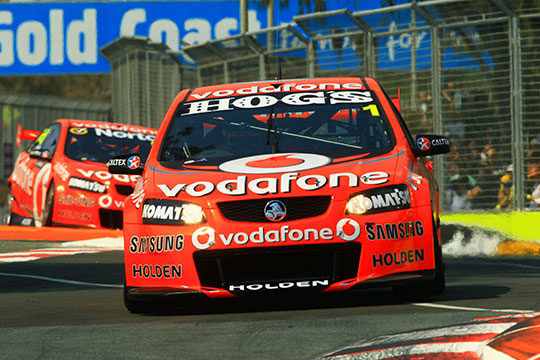 Whincup opted to drive for the entire opening practice session in his TeamVodafone Commodore, working on balance and trying to replicate a similar set up to last year’s Gold Coast 600 race set up before finishing the session 11th.

The second session saw the international co-drivers take to the track for a 40 minute session, Bourdais quickly picking up where he left off last year, setting the third fastest time.

Bourdais was back out in the #1 Commodore in Practice 3, working on race preparation, practicing starts and perfecting race lines. The frenchman posted the eighth fastest time of the session.

The defending V8 Supercar Champion was back behind the wheel for the final practice session of the day. Whincup continued to work on race preparation until the final ten minutes of the session, when he switched to a set of green soft compound tyres to test a qualifying set up before ending the day fifth.

Lyons struggled to find the correct race line whilst avoiding cutting the curbs in the second session and ended his first hitout 19th.

After reviewing video and data from the previous session,  Lyons got back behind the wheel of the #888 Commodore and after a strong run, finished the session fifth on the timesheets.

With the final session open to all drivers, Lyons started the session but brought it back in after one lap for driver change practice, Lowndes completed the session, the duo ending the day 10th.