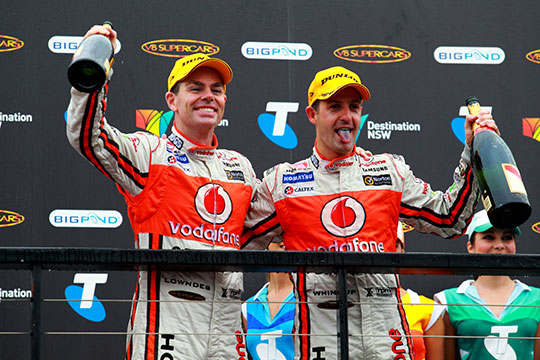 Lowndes and Whincup qualified 5th and 24th respectively for today’s gruelling 74 lap race but after receiving a post race penalty docking him of 25 points for an on-track incident, Lowndes’ full focus was on maintaining second in the Championship.

Whincup, who had a battle on his hands to come through the order, impressively gained 17 positions to end the race fifth.

In claiming his fourth V8 Supercar title, Whincup collected a total of 12 race wins, 7 pole positions and an impressive 24 podium finishes (including wins) across the 2012 V8 Supercar season.

Lowndes fought gallantly throughout the season up until the very last lap of today’s 74 lap race, finishing in the top four of the Championship for the eighth consecutive year. The #888 driver boasts 7 race wins, 4 pole positions and 14 podium finishes for the 2012 season.

With a total of 19 race wins, 11 pole positions, 38 podium finishes, 4 1-2 victories and the Supercheap Auto Bathurst 1000 crown, TeamVodafone also took out the 2012 Teams Championship for the fourth time in five years.