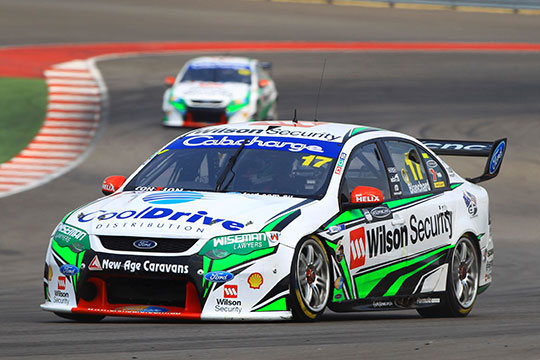 Ford Performance Racing and Dick Johnson Racing, whose six entries make up Ford’s presence on the 2013 V8 Supercars grid have moved quickly to respond to the news that Ford Australia will cease manufacturing in the country from 2016.

While factory team Ford Performance Racing, whose current three year contract with Ford runs out at the end of 2013, say the announcement does not alter the current discussions already underway between the two companies, Dick Johnson Racing team owner, Dick Johnson says he does not know whether his team will still be racing Fords when the company closes its local manufacturing operations.

“While we are of course sorry to hear that Ford will be ending local production from October 2016 this by no means signals an end to Ford in Australia, nor to the close relationship we have with the company,” Nash said.

“Ford is a robust global company and one that has taken a tough decision to ensure the future viability of its business here in Australia. It will continue to be a significant force in the Australian automotive landscape.

“We are proud to fly the Ford flag and look forward to doing so for years to come.”

Dick Johnson’s name  is synonymous with Ford and his association with the Blue Oval brand stretches back to the 1970s, despite its lack of financial support in recent years. But while he accepts that the team’s business model may need to change with the news of the Ford production closure, he expects the team to be racing in V8 Supercars for a long time to come.

“When any business changes direction it has an effect on the people,” said Johnson.

“With Ford’s announcement today there are many families of long term Ford employees that will no doubt be thinking of their future.

My association goes back a long, long way and the Ford and DJR brands have achieved some great success in motor sport. We have enjoyed a very special relationship which has produced a loyal fan base for both our brands.

Clearly with the Falcon finishing up in 2016 as a locally produced car it will have an effect on our racing program. Will we still be racing Fords then? I don’t know, but Ford will continue to sell cars here and I can assure you we intend to be racing V8 Supercars out of the DJR workshops long into the future.

Nothing stays still in this business. We have already seen Nissan and the customer Mercedes brands emerge this year so it is logical to think that there will be others that see V8 Supercars as a good marketing tool. It may be a Ford product for us; it may not be.”